Headquartered in New York City's iconic Flatiron building, St. Martin's Press is one of the largest publishers of English-language books in the world. The publishing house puts out approximately 700 titles per year under multiple imprints.

Macmillen Publishers of UK founded St. Martin's in 1952, naming it for St. Martin's Lane in London. The house was privately owned until the late 1990's, when it was sold to Holtzbrinck Publishers, LLC. This group of publishers, held by Verlagsgruppe Georg von Holtzbrinck, is a family concern that also owns publishing houses Farrar, Straus and Giroux, Holt Publishers, and Tor-Forge Books. 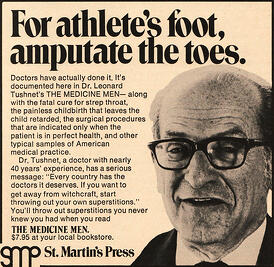 St. Martin's Press has published some interesting and controversial titles over the years.

St. Martin's Press is known for publishing works by an incredibly wide variety of authors, and they wor with a number of bestselling authors such as Dan Brown, Janet Evanovich, and Robert Ludlum. Another claim to fame: St. Martin's Press publishes The New York Times crossword puzzle books.

In a 1976 statement, the publishing house stated that it "rarely [designates] first editions per se." Revised editions of the book may be denoted as subsequent editions, and occasionally the printing will be noted on the copyright page. The next statement, in 1988, noted that there was no change in first edition identification practices.

Picador's first statement regarding first edition identification defers to the conventions of Pan Books Ltd, as do Pavanne, Piccolo, and Piper. . Their 1988 statement begins with a reminder that Pan Books largely publishes reprints, and that only approximately 15% of their output was original material. The publisher denoted four different categories of books, each with its own convention:

Following this information are the Pan Books address; numerical indication of impression number; copyright symbol and copyright owner; and the ISBN. Impression number had been noted throughout the publisher's history, but the addition of "2nd printing," "3rd printing," etc began only around 1982. Since then all printings have been indicated with a row of numbers from 9 down to 1, 19 down to 10, and the lowest figure indicates the impression number. A reprint with corrections is also specified if the changes aren't substantial enough to designate the book as a new edition. In 1994, Pan Books Ltd issued another statement, reiterating the conventions followed in 1988.

After about 1968, the date was omitted from the title page and instead the words "First published (year) by (imprint)" appeared on the back of the title page of all first editions. Reprints and new editions bore the words "Published by (imprint)" and a statement similar to that used before 1968 to indicate the book's bibliographic history. During the transitional years of 1968 and 1969, either practice may have been used. Other important points:

In 2000, Macmillan Publishers Limited added that starting in 1996, they had begun the practice of marking printings and reprints with a row of numbers from 1 to 10. First printings had the "1" present in the string. They also added that the following imprints followed these conventions: Macmillan Press Ltd (UK) (from September 1, 2000 rebranded as Palgrave Publishers Ltd); Macmillan Children's Books (UK); Pan Macmillan (UK); Pan Macmillan UK imprints; Picador; Boxtree; Sidgwick; and Jackson.