When recollecting writers who utilized the science fiction genre as a means for political and social commentary, Ray Bradbury, George Orwell, and Isaac Asimov often come to mind. But in the early part of the 20th century, a young writer named Karel Čapek also used sci-fi to expertly grapple with topics like totalitarianism and control, challenging the harsh Nazi rule in his native Eastern European homeland.

Credited with inventing the term “robot,” Čapek’s life and work provide an interesting study for many reasons. Not only did he greatly influence the science fiction genre, but he also played an integral part in the continued revival of the Czech written language. 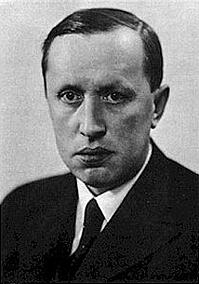 Karel Čapek was born in 1890 in what is now the Czech Republic. He attended Charles University in Prague, and though he never fought in World War I due to spinal malformation, Čapek used the Great War as the inspiration for much of his work. He was as an editor for the The National Newspaper before joining the staff at the more liberal and popular-based People’s Paper in 1921.

For Čapek, politics were very personal. He held to a strong anti-fascist belief system and developed close relationships with many of the founders of the Czechoslovakian state. Čapek hosted the “Friday Men” - a weekly gathering of the political and intellectual forerunners of his time, including the first president of the Republic of Czechoslovakia. Čapek refused to flee his homeland after the Nazis took over rule, despite being targeted by them and listed as second most wanted. He died from pneumonia in 1938.

Čapek’s politics and critical lens ooze out in his works. He wrote novels, plays, and short stories with linguistic and political savvy, coupled with, in many cases, an incredible sense of humor. Čapek explored issues of nationalism, human nature, and he expressed his wariness for unethical dictatorships, corporations, and inventions. 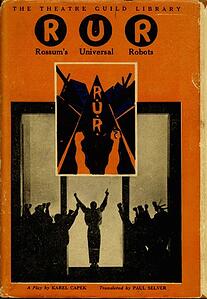 Much of Čapek’s work was completed with his brother, Josef. One of the pair’s earliest endeavors was the 1920 play, R.U.R. (Rossumovi univerzální roboti), a sci-fi breakthrough. In it, the word “robot” was used for the first time. The Čapek brothers presented robotic beings which could feel pain - also a first - and learn to love. Čapek credits his brother with coining the term “robot”, which literally means “hard labor” in Czech. The impact of “robots” can be seen in the waterfall of literature which has followed and taken up the subject, including, and especially, Isaac Asimov’s novel I, Robot.

According to his biographer, Ivan Klima, Čapek also played a major role in reviving Czech as a written language. The Czech National Revival, a cultural movement and renewal of Czech literature and national pride, occurred in the 18th and 19th centuries. However, due to the harsh German rule that followed, the progression of the written Czech language was stunted.

In 1918, following the institution of the Republic of Czechoslovakia, writers took advantage of a new-found freedom to write in their native language. But, a severe disconnect was present between the high society written language of centuries prior and the popular language of the time. By choosing to write in the vernacular, Čapek helped bridge the gap and align Czech written word with its spoken word. Čapek aptly used a high and low brow style interchangeably, and the result greatly contributes to the humor in his writing.

Karel Čapek was indeed a master writer. He was never awarded a Nobel Prize for Literature, though that’s almost certainly because his work was offensive to the Nazis at a time when the Swedish board did not want to risk their displeasure.