Have you ever thought about taking a trip to Iceland? If you fly into Reykjavík, you’re only a short drive from Gljúfrasteinn, the home of the Nobel Prize-winning novelist Halldór Laxness. Laxness was born in 1902 in Reykjavík, and he traveled through Europe in his 20s before settling down in Iceland. Some of the author’s most prominent works include The Great Weaver from Kashmir (1927), Independent People (1935), The Atom Station (1948), The Fish Can Sing (1957), and Under the Glacier (1968). A short while ago, we took a tour of his home and learned more about Laxness’s possessions, writing habits, and deep love for the landscape of his country. 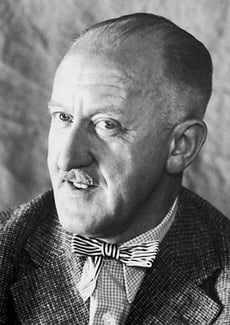 The Entryway and the Eternity Clock

The driveway to Gljúfrasteinn is just a quick turn off the highway that leads to Thingvellir National Park. Both mountains and running streams surround the property. Upon first entry into the house, visitors are greeted by a large green clock, slowing ticking out the time. The audio tour, conducted via a recording by Laxness’s wife, Auður, explains that the clock is the very one featured in Laxness’s novel The Fish Can Sing. Indeed, the author depicts the clock as one in which time both runs and stops:

“How did it ever come about . . . that I got the notion that in this clock there lived a strange creature, which was Eternity? . . . It was odd that I should discover eternity in this way, long before I knew what eternity was, and even before I had learned the proposition that all men are mortal—yes, while I was actually living in eternity myself.”

A quick turn to the right through the entryway reveals a large living room with a grand piano, ample seating (including a solitary leather chair reserved for the author), and an intricate tapestry hanging on the wall. The tapestry, as it turns out, was a gift from Auður to her husband when he was awarded the Nobel Prize. She handmade the textile in preparation for Laxness’s achievement. To this day, Laxness remains Iceland's lone Nobel Prize winner.

Given Laxness’s interest in international travel, the rooms are also filled with objects from abroad. Pillowcases from across Central and South America grace one of the sofas, while carved statutes from Africa and Oceania bedeck the fireplace mantle. 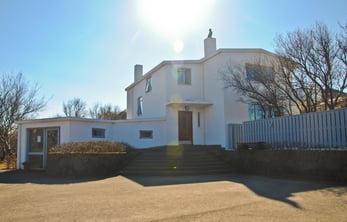 Onto the Second Floor

Laxness’s collection of objects continues upstairs in his library, where a large grouping of tchotchkes line one of the shelves. According to Auður, Laxness brought these small dolls and other items home for his children, and the family ended up describing their location in the room as “the world.” The library contains the books owned by Laxness, including works in multiple languages. What was the novelist reading? From works by Bertolt Brecht in German to Spanish-language editions of Federico Garcia Lorca’s plays, Laxness read widely. His bedroom, also on the second floor, contains a number of books in English by Upton Sinclair.

A visit to the second floor of Gljúfrasteinn also reveals one of Laxness’s writing habits — standing up at a standing desk, looking through a window while transcribing his fiction to Auður, who typed. The novelist’s wife also maintained a collection of all the world’s translations of her husband’s novels, carefully lining a series of built-in bookshelves.

If you have time during your visit, you can explore the trails outside the home that Laxness walked regularly, using his time outdoors for imagination and inspiration. And don’t forget to pick up some reading material for your trip home — the small bookshop inside the house offers Icelandic and English-language editions of Laxness’s best-loved novels.