In 1980, at age 48, Umberto Eco made his debut as a novelist with The Name of the Rose (originally in Italian Il nome della rosa) and has been a literary and philosophical juggernaut ever since.  In addition to his impressive publishing rap sheet, Eco also had a successful academic career in the fields of literature, semiotics, medieval history, and quite a few others. Given that he curated a 2009 exhibition at the Louvre in Paris on the essential nature of lists, we honor this great thinker today with one of our own. 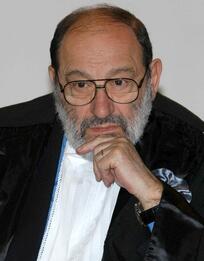 1. Eco was born in northern Italy in 1932, so naturally he was enrolled in the Fascist youth movement like all other children his age.  It wasn’t until 1943 when Fascism began to crumble in Italy that Eco became aware of any other political views.

2. Although his mother and father read for pleasure, it was Eco’s grandparents who instilled in young Umberto a love for books.  His maternal grandmother brought home two or three books a week for him from the municipal library. His father’s father took up book binding as a hobby in retirement. Eco remembers piles of beautiful old books at his grandfather’s house.

3. In his adolescence, Eco read many comic books and even wrote his own.  In an interview with The Paris Review, he recalled spending hours on making his books look as though they’d been printed, though the work was so intensive that he never finished any of them.

4. Eco choose to study medieval philosophy and literature when he attended university.  So in love with the Middle Ages was he that, on two separate research trips to Paris, he only walked down streets that existed in that time period. 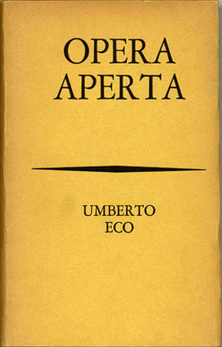 5. Long before he was published as a novelist, Eco made a name for himself in the academic world with Opera Aperta (“The Open Work” in English) in 1962.  Eco argued that texts were open and flexible depending on the reader.  Some think he was instrumental in the rise of the Reader’s Response theory of literary criticism, but others say he merely foretold what was coming.

6. Lest you begin to think of him as a stuffy intellectual, know that Eco has a great love for TV crime dramas like Starsky & Hutch, Columbo, Miami Vice, and CSI.  His obsession with the detective genre takes center stage in The Name of the Rose, whose main character is a crime-solving monk.

7. As we’ve noted before on this blog, Eco is a serious rare book collector. His personal library comprises over 50,000 volumes between his two homes. He uses his library for reference, not as a collection of books read. Once, when his secretary wanted to catalog the library, Eco asked her not to.

8. Eco’s novels have been translated into more than thirty languages, and he works closely with his translators to negotiate the subtleties of each language.

9. Conspiracies, lies, and half-truths are themes that are constantly at play in Eco’s stories.  In particular, Foucault’s Pendulum, Baudolino, and his most recent The Prague Cemetery feature characters that make up conspiracy theories which others take to be truth.

10. In his youth, Eco loved to play the trumpet. Then, in his mid-70's, he purchased a new instrument and began playing once again.