A Glimpse of Understanding: A(nother) look at Post 9/11 Novels

September 11, 2001. A day which—much like December 7, 1941—will live in infamy. Most everyone you ask can remember exactly where they were, who they were with, and what they were doing when they heard or saw the news of the 9/11 terrorist attacks. In fact, many of us who lived through the day and were tuned into the news can remember the moment the second plane hit the south tower because we watched it happen.

For New Yorkers and the families of the victims of these horrific attacks, the impact of 9/11 is even greater. Which begs the question—how can fiction encapsulate events that seem indescribable? When words will never be enough, how do we write about it? Can we? Should we? 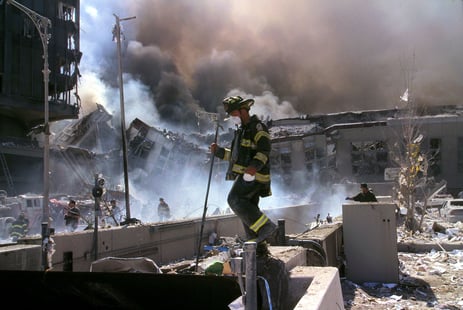 In 2015, we published an article titled A Glimpse of Understanding: A Look at Post 9/11 Novels. You can read it here if you’d like to get caught up.

Today, we thought we’d take another look at post 9/11 novels and explore what these authors do well in unpacking the seismic event of September 11, 2001.

Falling Man is one in a long line of notable novels by Don DeLillo. In this novel, DeLillo takes as his focus a lawyer named Keith and his estranged wife, Lianne. Keith survived the September 11 terrorist attacks; however, his life in the aftermath is a mess. He and his wife fall into a routine, but Keith has an affair with a fellow survivor and spends much of his time alienating himself and playing poker.

A concurrent storyline is that of the “falling man”, a performance artist who chooses different places throughout the city to suspend himself by a harness and re-enact the Richard Drew photograph of the man falling from the North Tower on 9/11.

Critical review of Falling Man has been mixed. Writing for the New York Times, Michiko Kakutani argues that this novel is a “terrible disappointment”. His proof: the novel’s small scope—focusing on just one man and one woman. Kakutani maintains that Keith comes off as juvenile and “self-absorbed” and that many people were more “grievously injured than Keith, people who didn’t react by leaving home and work to pursue a mindless round of anodyne games in Vegas.”

In an article titled “Casting about for the truth of 9/11: Don DeLillo’s Falling Man”, Sandy English writes about hearing DeLillo read a passage from the novel:

“After he finished, I realized that some of the listeners were crying, and I turned to a friend who had been jogging near the World Trade Center that sunny morning in Hudson River Park and asked her if DeLillo had captured the time when over 3,000 people died to “a soft awe of voices in the distance.” Without taking her eyes off the author at the podium, she simply nodded”

Clearly, DeLillo’s way with words and ability to succinctly bring readers to the moment of terror is on full display in Falling Man: “DeLillo summons up an omnipresent and immediate terror through four senses at once”.

Whether the story line is an adequate one—again, can it ever be?—is up to readers to decide for themselves.

All We Have Left by Wendy Mills

This Young Adult novel was published in August of 2016. In an interview with the New York Times, Mills explains that she got to work writing the novel after her son asked her why we take our shoes off at airports. Mills realized that young people who have no memory of 9/11 (or, for many, who were not even born) do not understand the events or the effect the terrorist attacks had or the way the world was “before.” As the New York Times articles states:

“For many children who weren’t alive on Sept. 11 or were too young to remember the attacks, the events feel distant and unreal, like a Hollywood disaster movie or a historical tragedy like the John F. Kennedy assassination. Some know only the broadest outline of the event, while others have been shielded from it altogether. And as the years pass, writers worry that their own memories of the day are slipping away.”

Mills’ story—which bounces back and forth between 2001 and 2016—takes as its protagonists a Muslim girl named Alia, who is caught in an elevator in the World Trade Center, and Jesse, the younger sister of a boy who was in the same elevator. The story is heartbreaking and hopeful and depicts the ever present impact of this national tragedy in a truly poignant way.

Mills’ All We Have Left was one of a handful of YA novels published around the 15th anniversary of 9/11. Others include Towers Falling by Jewell Parker Rhodes and The Memory of Things by Gae Polisner. All of these authors stated they struggled with what to include to balance giving young adult readers a full picture of the horrifying events while also being conscious of the age of their audience. Still, the response of young readers has been overwhelmingly positive.

Bleeding Edge by Thomas Pynchon was a finalist for the National Book Award for Fiction. In this 2013 novel set in Manhattan’s Silicon Alley, we get several hundred pages of life before 9/11 wherein we follow investigator Maxine Tarnow as she digs into fraudulent activities between a start-up tech company called “hashslingrz” and a mysterious associate company called Darklinear Solutions.

The 9/11 precursors in Bleeding Edge—including a man with an expert sense of “foresmell” who is terrified of a scent that he believes to be yet-to-come fires in NYC, and Horst and Maxine’s conversation about market behavior predicting terrible disasters “if the two were different forms of the same thing”—are unnerving to readers who know what is coming.

As such, the book is classic Pynchon, and we get few resolutions and gain minimal clarity as the story progresses. However, that’s not really the point with Pynchon. As Wired notes:

“Where Bleeding Edge really shines is in its evocation of the age and its sense of collapse. Take this description of a Y2K-themed party on the night of September 10, in which an insta-nostalgic celebration of an avoided disaster plays as unknowing prologue to a fast-approaching one:

“The theme of the gathering, officially ‘1999,’ has a darker subtext of Denial. It soon becomes clear that everybody’s pretending for tonight that they’re still in the pre-crash fantasy years, dancing in the shadow of last year’s dreaded Y2K, now safely history, but according to this consensual delusion not quite upon them yet, with all here remaining freeze-framed back at the Cinderella moment of midnight of the millennium when in the next nanosecond the world’s computers will fail to increment the year correctly and bring down the Apocalypse.”

As a resident New Yorker, many have noted that Pynchon has as much a right to write about 9/11 as anyone, and he lends his own trademark style to the ghastly events of the day in Bleeding Edge.

Words can perhaps never fully explain the events of September 11, 2001; however, in their efforts, these authors shine a light on the country's history and give present and future readers and scholars a glimpse of understanding into that unfathomable day.