A Laugh and a Drink with Kingsley Amis

Kingsley Amis knew how to get a laugh out of his readers. He wrote many novels that depicted modern British life in a humorous manner, and it was these comedies that earned him his fame – but humor wasn’t his only forte. Amis dabbled in many genres, from poetry to science fiction. The Times listed him as one of the top 50 British writers in 2008.

On April 16th, Kingsley Amis was born to William and Rosa Amis in south London.  His family was not wealthy, but he was able to attend the City of London School on a scholarship.  From there, he went to Oxford University, where he studied English. Kinglsey met Philip Larkin, a fellow writer who would later become a close friend.  Amis’s education was disrupted when he was called to serve during World War II, but he returned to Oxford after the war to finish his degree. 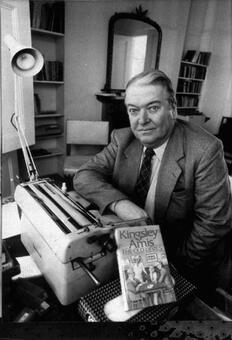 Upon graduation, Amis committed himself to a life of writing, and his first book, Lucky Jim, was published in 1954. Critics loved his humorous writing style and his depiction of life in Britain. The book was a success in England and the United States, and it was eventually published in 20 different languages for a global audience.

Lucky Jim was set on a college campus, and Amis became a forefront writer in the “campus novel” genre. Amis’s main character was a professor, and he used the novel to satirize the pretentious attitude and snobbery that can often be found in academic settings.

Amis also worked on his poetry during this time, and he was a member of “The Movement,” a group of English poets which also included David Alfred Davie and Amis’s college friend, Philip Larkin. The group wrote what they called “new apocalyptic poetry,” which focused on war, politics, and realism. They eschewed romantic and experimental writing.

Amis’s political views wavered and changed as he aged, and his current leanings always showed in the writing he produced. As a young man, he joined the Communist Party, but he later dismissed this phase as something everyone at Oxford goes through. From there, Amis’s political beliefs made a gradual journey toward conservatism.

Despite many valuable contributions to the literary landscape, Amis did not always have a spotless reputation.  He married and divorced twice, and he was often accused of adultery.  He had a well-known fondness for alcohol that prompted him to declare the he was “one of the great drunks of our time.” He tried to blame his alcoholism on his necessity to behave like his characters do.

Still, Amis was highly respected in his society.  He was knighted in 1990, five years before passing away from complications after a stroke.  He had published 24 books in his lifetime, including poetry and short story collections, mysteries, science fiction, literary criticism, and a James Bond sequel.