A Literary Look at Hillary Clinton

Hillary Clinton’s resume is an impressive one. Secretary of State. Democratic Party Presidential nominee. First Lady. Lawyer. Advocate. Author. Her life and work has been scrutinized thoroughly—as is the case with most politicians and public figures—in countless books, articles, and op-ed pieces. Whether you agree or disagree with Clinton’s political beliefs, it is difficult to argue with her impact on politics, the country, and the literary landscape over the past several decades. Today, we’d like to explore a few of the books written by Hillary Clinton. 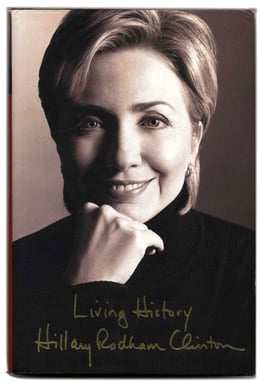 Hillary Clinton has published three memoirs. The first is titled Living History and was published in 2003 by Simon and Schuster. The publisher gave Clinton an enormous advance, and she worked on the book following her tenure as First Lady of the United States and while she was a New York State Senator. The book was written in about two years. At over 550 pages in length, many critics have noted that it would be nearly impossible for someone to pen a book of such length in such a short time if it was the only project they worked on for two years straight. In Clinton’s case, she was also working full time in the Senate. Living History, then, critics argue, is not actually Clinton in her own words, but rather Clinton in the words of her ghost writers. For many, this leaves an unpleasant taste in their mouths.

Of course, Hillary Clinton did not hide the fact that Living History was a collaborative effort. In the acknowledgement section of her memoir, Clinton states, “This book may not have taken a village to write, but it certainly took a superb team ... The smartest decision I made was to ask Lissa Muscatine, Maryanne Vollers and Ruby Shamir to spend two years of their lives working with me.”

So, while these writers were not listed as co-authors on the cover of Living History, Clinton certainly isn’t denying their existence. And in Muscatine’s own words, no one can deny Clinton’s work ethic and the effort she put in to crafting the memoir. In an article in Elle magazine, Muscatine speaks to the schedule the writers and Clinton were adhering to in order to fit in a full day of work on the Hill for Clinton on top of legislative work and book edits. Muscatine says in reference to when the book edits were getting done, “At one point, I finally looked at these two younger women and said, ‘You know what’s really funny? She does not think there’s anything weird about us meeting at her dining room table at three in the morning.’ ”

The response to the content of the memoir was mixed. Some praised Clinton’s depiction of her early life and work. Others condemned her for not being more open about major events like the Monica Lewinsky scandal. Living History was a publishing success, setting a non-fiction sales record. Clinton promoted the book widely, signing 20,000 copies herself. The audio version of Living History was also nominated for a Grammy for Best Spoken Word Album.

Clinton’s second memoir was published in 2014 and titled Hard Choices. Clinton announced her plans to write a second memoir upon leaving her position as Secretary of State. In this effort, Clinton focused on her experiences as Secretary of State while also including her reactions to losing out on the 2008 Democratic Party presidential nomination to Barack Obama. She goes on to include other personal anecdotes from her travels and family life.

When the book was published, she took to the promotional trail with gusto, and the proponents and critics who turned out at her book signings and other promotional events mirrored those Americans have come to know on the campaign trail. While she made no declaration in the book about her decision whether or not to run for President in 2016, many considered its success or lack thereof to be indicative of how Clinton would do if she did decide to run.

Clinton’s most recent memoir, What Happened was published by Simon and Schuster in 2017. As the title suggests, What Happened details Clinton’s assessment of her Democratic Presidential campaign and the results of the 2016 Presidential election. The book was an immediate best seller, with fans of Clinton hungry for more from the candidate they voted for after she kept a low-profile in the wake of President Trump’s victory.

Naturally, critics were all over the board in response to Clinton’s latest memoir. Many praised her for the regret and awareness she showed in writing about what she sees as her mistakes and the ways in which the results of the election could have gone differently. Jeff Greenfield writing for Politico Magazine praises Clinton’s authenticity. Others lament the finger pointing and general lack of answers (Sarah Jones wrote an article for The New Republic titled “Hillary Clinton Doesn’t Get It”, for example.).

Where ever you stand in your opinion of Hillary Clinton, these three memoirs give readers quite a glimpse into the mind and work of the most recognizable female politician in recent history. In fact, so great has Clinton’s influence been that there is a whole slew of books written about the woman, not to mention the other books written by Clinton that we didn’t have space to mention here. If you’re interested in politics in the last half century, feminism, presidential, or political history, grab a copy of these books add to your collection.