A Literary Tour of Boston

In less than two weeks, Boston will be the place to be for rare and antiquarian book collectors! While the Boston International Antiquarian Book Fair and the Boston Books, Print, and Ephemera Show will be the main events, the city is home to a number of literary landmarks that certainly merit spending a few extra days in and around Boston.

Friday, November 15 kicks off the 36th Annual Boston International Antiquarian Book Fair. Ideal for both the casual browser and the serious collector, the fair runs through Sunday, November 17. Fine dealers from all over the world will come together to offer an astonishing selection of rare books, prints, maps, and other ephemera. Experts will also offer special programs on a wide variety of topics, from building a sports library to exploring the history of espionage. And rare book collectors also love to attend the Boston Books, Print, and Ephemera Show, someties called the "shadow fair," which will be held on Saturday, November 16.

By the 1800's, Boston had already earned the nickname "Athens of America." For many years, Boston was the most important city in American letters; it was home to both presigious publishing houses and exceptional authors. Now the bookish adventurer will find plenty of destinations to explore. 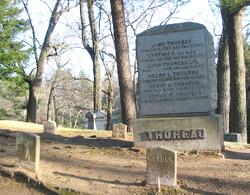 Located just outside Boston in Concord, the Sleepy Hollow Cemetery actually has no connection to Washington Irving's "Legend of Sleepy Hollow." But it is the site of several prominent authors' graves, who are buried in what's known as "Author's Row." Among Sleepy Hollow Cemetery's most notable inhabitants are Louisa May Alcott and Henry David Thoreau.

Originally built by publisher Daniel Lothrop around 1700, this colonial homestead later served as the residence for both Louisa May Alcott and Nathaniel Hawthorne. When Alcott moved out of the Wayside, she simply moved next door to Orchard House. This property was the setting for her most famous novel, Little Women.

Located at 103 Irving Street, Julia Child's home looks rather unassuming from the outside. But it's here that the legendary chef and cookbook author filmed many of her cooking shows and specials. Child lived in this home with her husband for several years.

The Parker House first opened in 1855, and proprietor Harvey D. Parker managed it until his death. Now managed by Omni Hotels, the hotel was the site of Charles Dickens' first American reading of A Christmas Carol. He read for the Saturday Club (sometimes called the Saturday Night Club), a prestigious group that included illustrious authors like Heny Wadsworth Longfellow, John Greenleaf Whittier, Oliver Wendell Holmes, and James Russell Lowell. Dickens, also a member, resided at the Parker House for a full two years.

The Boston Athenaeum first opened its doors as a membership library in 1807. Though the library is still membership based, it serves as a public library for many of its members. The Boston Athenaeum is home to diverse collections of art and rare books, and it's also a vital part of the Boston community. On Tuesday, November 12, Professor William C. Carter will deliver a Book Talk on Proust's In Search of Lost Time, and on Friday, November 15, Holly Moore, Lloyd E. Cotsen Head of Conservation at the Huntington Library, will give a talk entitled "Growing the Huntington: A Programmatic Approach." Both events are open to the public and will undoubtedly be fascinating for rare book enthusiasts.

Henry David Thoreau made his home on Walden Pond for two years, and now the land has been preseved as a tranquil state park. Considered the birthplace of the conservation movement, Walden Pond State Park encompasses over 400 acres of land surrounding a pog with a small beach. Visitors can also tour a replica of Thoreau's home. Walden Pond inspired Thoreau's best known work, Walden, which was so idyllic that BF Skinner later adopted it as the setting for his behavioralism-inspired utopia novel, Walden Two.

If you have time to venture further from Boston, it's worth traveling to a few of the area's more far-flung literary attractions.

The House of the Seven Gables 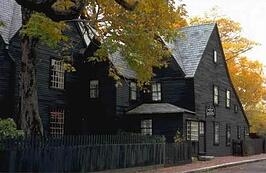 A bit of a drive from Boston, in Salem, you'll find the House of the Seven Gables. Originally built in 1668, the home is the oldest surviving wooden mansion in New England and likely one of the most famous homes in the country; Nathaniel Hawthorne memorialized it in his 1851 novel The House of the Seven Gables. The house was built by Captain John Turner, who eventually lost his fortune. The property passed to the Ingersolls, who were relations of Hawthorne. He spent time there when he was young, and his cousin Savannah Ingersoll told him of the house's history and showed him the architectural remnants of the house's original seven gables. (By the time Hawthorne saw the house, only three gables remained.) Horace Ingersoll would also be the one to tell Hawthorne the story of Acadian lovers that inspired Longfellow's poem Evangeline (1847). 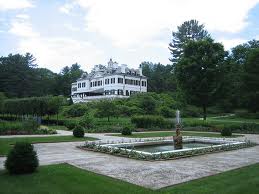 This stunning country manor was what Edith Wharton called "first real home." Inspired by the 17th-century Belton House in England and both French and Italian architecture, Wharton actually designed the home herself. She applied the principles outlined in her first book, The Decoration of Houses (co-authored by Ogden Codman, Jr). Wharton lived at the Mount with her husband from 1902 to 1911. The home was later used as the girls' dormitory for Foxhollow School and home to the theater company Shakespeare and Co, before passing back to the hands of Edith Wharton Restoration. Though the main house isn't open in November, visitors are welcome to wander the home's extensive grounds.

Herman Melville's family owned property in the Berkshires. In 1850, he and his wife, Lizzie took their youn son Malcolm to pass the summer there. Melville was invited to attend a picnic where both Holmes and Hawthorne (by this time Berkshire residents) were in attendance. Melville and Hawthorne immediately became fast friends, and Melville decided almost on the spot to buy property in the Berkshires. He purchased a property immediately adjacent to his family's and named it Arrowhead, after the artifacts frequently found in the fields there.