A May Day Round-Up

May 1, commonly known as "May Day", is upon us. For many, this is an unofficial start to the warm weather season, a chance to get outdoors and celebrate, maybe even dance around a traditional maypole. For many others, this day symbolizes much more and is spent remembering or participating in labor protests and worker's rights movements. After all, May 1 is not only May Day but also International Worker's Day in many locations. We've written in the past about literature that deals with this particular day in history, and we thought we'd share some noteworthy articles and titles with you today. 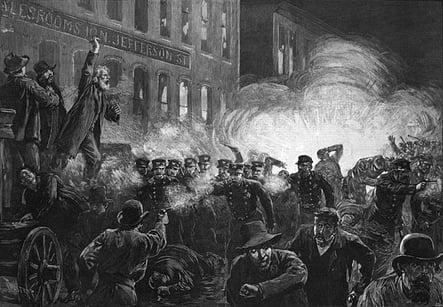 Four Examples of May Day in Literature

May Day—also commonly referred to as International Workers Day—is recognized in the United States and Europe on May 1 to commemorate the Haymarket Riots in Chicago on May 4, 1886 where demonstrators clashed with police over the issues of workers’ rights, specifically the movement for a standardized 8-hour workday. The movement to mark May 1 as the official yearly recognition of the labor movement’s success began shortly after the Haymarket Riots and was championed by the Second International, a socialist labor party organization formed in Paris in 1889. May Day also coincides with an ancient European holiday celebrating the beginning of spring and is a national public holiday across many European countries.

As proven time and time again, great storytelling is often born of great conflict—whether internally in regards to the narrative itself, or externally in terms of the writer’s experiences in creating the story. To celebrate the struggle workers endured in advancing the 8-hour movement—8 hours of work, 8 hours of recreation, and 8 hours of rest—here are four examples of when May Day and literature collide. Read more >>

Worker's Influence: The Literature of May Day

In 1886, workers in Chicago rioted in what is now known as the Haymarket Affair. On May 4 that year, workers gathered to protest and demonstrate in attempt to have the work day reduced to eight hours. During an attempted police dispersion of protesters, a bomb was thrown into the crowd. The resulting explosion caused police to open fire on the crowd, killing four workers. Further violence took place in Wisconsin the following day with state militia killing seven, including two innocent bystanders...

The following works exemplify the impact the Haymarket Affair and the implementation of International Workers Day has had on literature.

“May Day” by F. Scott Fitzgerald

Though F. Scott Fitzgerald is best known for his novel, The Great Gatsby, his short story “May Day” is an impressive example of the short story form and focuses in on his common themes of class and society. Originally published in the literary magazine, Smart Set, the story takes place in 1919 during the weekend of the May Day Riots in Clevelandduring which several dozen protesters were wounded and two were killed.

Lola Ridge was born Rose Emily Ridge in Ireland in 1873. The anarchist immigrated to the United States in 1907 and published her first book of poetry in 1918. Her work often centered around the struggles of the working class in the harsh, industrialized America. Though she was only thirteen and living in New Zealand at the time of the Haymarket Affair, her poem “Histrionics,” originally published in New Masses in 1926, focuses on the hanging of Albert Parsons, one of the men convicted of conspiracy to throw the bomb into the crowd that day. New Masses also published Alfred Hayes' poem “Into the Streets May First,” a poem focusing on a Communist workers rebellion, in 1934. Read more >>