A.E. Housman: A Life of Grief and Passion

Both a poet and a scholar, A.E. Housman won over his readers with his lyrical writing, nostalgic themes, and powerful messages. Although he published only two volumes of poetry during his lifetime, these works have stood the test of time – especially his collection titled A Shropshire Lad, which explored human mortality and urged its readers to live their lives passionately and in the moment. 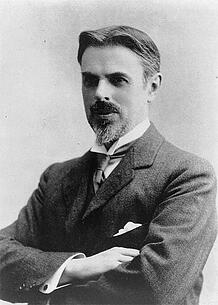 Housman was born Alfred Edward Housman on March 26th, 1859. He had six younger siblings, and the family lived in England, in a small hamlet called Fockbury. His schooling took place at Bromsgrove School, where he won several awards for his poetry during his adolescence.

The Beginnings of a Scholar

While attending the University of Oxford, Housman studied classics. He was passionate about his studies, although he had a hiccup while struggling with unrequited love for a heterosexual roommate. During this time he failed his final examinations, but still managed to pass his classes and graduate.

Housman's first ten years out of college were spent working as a clerk in London’s patent office. Although he was no longer an official participant in academic life, Housman continued to delve into classical studies on his own, and he eventually became a Latin professor at University College in London and finally at Trinity College, Cambridge, where he continued teaching for the rest of his life.

Housman returned to his love of poetry when his good friend, Adalbert Jackson, passed away. He wrote 63 poems with themes concerning early death, grief, unrequited life, and living life to the fullest. This poetry would eventually make up his first book, A Shropshire Lad.

The road to publication was challenging. After many rejections from traditional publishing houses, Housman decided to pay for publication out of his own pocket. It was not an immediate success, but its popularity grew as England began to experience tragedies associated with World War I. During this time, some of Housman’s poetry was set to music, broadening his audience even more.

Despite Housman’s growing fame, he did not enjoy the public eye. He kept a small circle of close friends, but he was known as a recluse who frequently skipped award ceremonies and other honors.

Housman’s second book of poetry was written in response to another friend’s impending death. When Moses Jackson, Adalbert Jackson’s brother, was dying, Housman put together a new collection of poems for him to read. This book, titled Last Poems, was published and became a success immediately.

While Last Poems was indeed the last volume of poetry published by Housman during his lifetime, a third, and truly final, book was released posthumously by his brother, Laurence. This collection was called More Poems. Laurence also released a complete collection of Housman’s works.

Numerous works have been named after or otherwise inspired by AE Housman. Nobel laureate Patrick White took the title of his 1955 novel, The Tree of Life,  from a Housman poem. Peter O'Donnell alluded to lines of a Housman poem with the title of his 1969 thriller, A Taste for Death, which in turn inspired PD James' eponymous novel, published in 1986. Housman himself is the protagonist of Thomas Stoppard's 1997 play The Invention of Love. And the James Bond film Die Another Day takes its title from Housman's poetry.