It has been suggested that Alfred Nobel created the peace prize in his will to assuage his guilt at the destruction and harm caused by his own inventions (dynamite among them). It is perhaps fitting, then, that in 1952 the prize was awarded to a man whose medical work in an African mission transcended guilt about colonialism to yield a legacy of saved lives, as well as a globally-praised philosophy.

By the time Albert Schweitzer began the humanitarian work for which he later gained acclaim, he had become prominent as a musical scholar, organist, and theologian. During his childhood in Alsace (which, at the time of his birth in 1875 was still a part of Germany) he was t

aught to play the organ by his father, a Lutheran minister. The spiritual elements of J.S. Bach’s work ultimately served as an inroad to the study of theology, which Schweitzer pursued at Kaiser Wilhelm University in Strasburg. By 1903, he had gained a permanent appointment at a theological college, whereupon he began a line of research that earned him considerable notice.

There is, perhaps, more than a little irony to the fact that Schweitzer, whose deconstruction of the 19th century understanding of Christ effectively ended an entire branch of biblical scholarship, would ultimately cite that very same Messiah as inspiration. Indeed, he posited in The Quest of the Historical Jesus (1906) that “(t)he Jesus of Nazareth who came forward publicly as the Messiah… never existed. He is a figure designed by rationalism… liberalism, and … modern theology.” So powerful was his conclusion that the branch of biblical studies dealing with the historical Jesus was essentially stopped in its tracks for several decades. In spite of this revelation, however, Schweitzer determined at age 30, the age at which Jesus began to preach, to repay the world for all of the joys it had bestowed upon him. Having had no previous medical training, he decided to join up as a medical doctor with The Society of Evangelist Missions. After a three year course of study in medicine, Schweitzer and his wife set off for Lambarene, a city in present-day Gabon.

Schweitzer’s humanitarian efforts were not without their critics. Where Schweitzer endeavored at once to spread the gospel through healing and to atone for the sins of colonialism, author Chinua Achebe has since asserted that his notion that “the African is indeed my brother but my junior brother,” reeks of the very same paternalism whose lingering effect Schweitzer hoped to undo. He also drew ire for staffing his hospital almost exclusively with transplanted Europeans, rather than training the local citizens. In spite of these critiques, however, the fact remains that the Albert Schweitzer Hospital, the fruit of his labors, was and still is a catalyst for saving and improving countless lives. 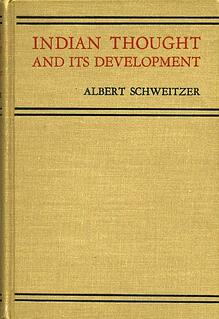 All of which brings us to his Nobel Prize. Although it was ostensibly awarded for his philosophy of "reverence for life," it is hard to imagine that he would have gained the prize if he hadn’t been putting that very philosophy into practice with his humanitarian work. The idea, of course, should not be glossed over. Drawing influence from Indian philosophy (which Schweitzer wrote about in his tract, Indian Thought and Its Development) and working from his belief in the failure of the Enlightenment to derive an ethical system from objective reality, Schweitzer took it upon himself to establish life and the will to life as the basic principals of morality. Essentially, as the name suggests, Schweitzer’s philosophy is based on the notion that life itself is sacrosanct, and that mankind has a responsibility to refrain from ending or harming life whenever possible. A lofty goal, certainly, but one Albert Schweitzer embodied to his last breath. His Nobel Prize may have been one guilt-ridden man’s posthumous gift to another, but one look at his life’s work and it’s clear that Albert Schweitzer had little to be guilty about.