Audrey Golden's paper "Pablo Neruda and the Global Politics of Poetry" won the third prize at the 2014 National Collegiate Book Collecting Contest. She recently earned a Ph.D. in English from the University of Virginia, and won first prize at her school's Student Book Collecting Contest. Her scholarship not only highlights Neruda as an author to be collected, but as a poet whose destroyed library must be remembered. We were fortunate to be able to interview her about her work and her discoveries about the legendary poet.

Your paper focused on Pablo Neruda, and recounted a story of how his library was destroyed in the Pinochet military coup. How do you see your work as an act of recovery? 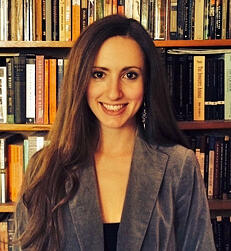 Several of the books in my collection weren’t properly preserved, and many of their covers and pages are beginning to disintegrate.  I’ve tried to ensure that these books are cared for as physical objects, and also as documents of literary history.  In that sense, I feel as though I’ve recovered them from irretrievable loss.  At the same time, some of the books in my collection (particularly those from Eastern Europe) seem to have been cast away—political poetry from the early and mid-20th century doesn’t receive the same attention it might have before the fall of the Soviet Union and the breakup of the former Yugoslavia.  By bringing them into a larger collection, I feel like I’ve recovered some of their global political significance.

What attracted you to studying Neruda?

First, I have long been interested in Neruda’s involvement in leftist political struggles—his opposition to Fascism during the Spanish Civil War, his interest in the possibilities that socialism might hold—and his popularity in the former Soviet Union.  One of my early literary loves is twentieth-century Russian literature (Andrei Bely, Mikhail Bulgakov, Vladimir Mayakovsky), and Neruda’s poetry appealed to writers who resisted oppression through literature.  In addition to politics—and this might sound like wishful thinking—I often imagine that Neruda and I are kindred spirits, both in our love for collecting and in our deep interest in world politics.  Like Neruda, I long to travel the globe, and I love to bring pieces of folk art (in addition to books, of course) back from those trips to fill my home.  Neruda seems to have had such a fondness for objects, personifying and perhaps anthropomorphizing them in some ways.  Since I was a child, I’ve collected matryoshka dolls, and I was delighted to see that Neruda, too, had filled his Santiago home with them.

You visited three of Pablo Neruda’s homes. As a collector and avid reader, what was that like? 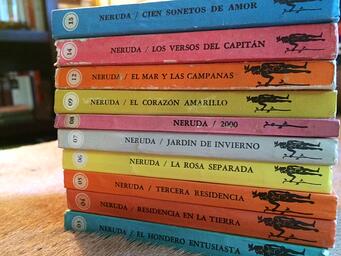 As I mentioned, I was astonished to be immersed in the world of a someone who had the most amazing passion for collecting.  From the enormous wooden figureheads in his Isla Negra home to the silver gaucho spurs along the bar wall in his Valparaiso house, each object was, so clearly, hand-selected.  The tragedy of his lost library (destroyed by the Pinochet regime) feels almost palpable when standing inside La Chascona or the house at Isla Negra.

What’s it like to establish a bilingual library? What are some of the challenges and rewards?

The rewards of a multilingual collection are difficult to even put into words! I love the idea of bringing the whole world (or as much as possible) of Neruda onto a series of bookshelves in my home.  In terms of challenges, I’ve had many.  My spoken Spanish could be much better, and as a result I often resorted to writing down questions for booksellers while in Argentina and Chile.  Some of the translations (in a variety of languages) I own have also been difficult to track down since they don’t correspond directly to the original Spanish titles.  This is particularly true for some of the Russian translations from the 1960s and 1970s, which have titles that translate roughly to “Life Prose.” My German language skills have made the acquisition of those books relatively easy in comparison.  In languages where I don’t have much familiarity at all, I’ve both struggled and been lucky.  For instance, a good friend from college is from Hungary and was able to help me inquire about books in Budapest, and a Jewish Studies professor at UVA helped to translate the Hebrew broadside I found for “Let the Woodcutter Awaken.”  I struggled enormously, however, in Hong Kong and Japan (where I can’t read or speak the languages at all), and thus I wasn’t able to find any of Neruda’s works to bring home with me.  If anyone reading this has any leads on Neruda books in translation from Hong Kong or Japan, let me know!

I wish I had found more of these in the Neruda books I’ve bought.  The only one that comes to mind is a notecard inside my 1973 German edition of Aufenthalt auf Erden (Residence on Earth).  In translation, the notecard simply reads, “Your love, Herr Lindhardt,” dated July of 1974.

What are some of your rarest volumes?

In terms of political significance, I think the two rarest volumes in the collection are my clandestine printing of Canto General from 1950 (which was printed in Chile during Neruda’s exile on very bad quality paper), and my copy of Cantos de Pablo Neruda, printed in Lima, Peru in 1943 with red-ink woodblock printings to accompany Neruda’s “Ode to Stalingrad.”  Some other volumes that are unique include my first edition Argentinian set of Memorial de Isla Negra, the Czech first edition of Spain in the Heart from 1946, the Israeli broadside I mentioned previously, and the Yugoslavian copy of Isla Negra, signed by its translator.

What are some of your most beautiful or striking volumes? 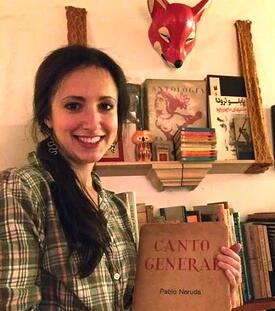 All of the Chilean printings from Nascimento Press are incredibly beautiful.  My favorite is the Antologia, which features a woodblock printing of one of Neruda’s ship figureheads on the cover.  Many of the Argentinian Losada printings, with their brightly colored covers, are gorgeous.  And the miniature Hungarian printing of Ode to Typography is incredible in its intricacy and delicacy.

Your collection is vast, comprised of books published in over 22 countries. Do you have any advice for collectors who want to create a truly international library?

Travel!  And when you do, visit antiquarian and used bookstores—and markets!  I can’t imagine taking a trip that doesn’t involve visiting bookstores and seeking out printed materials.  I’ve been really fortunate to have won a number of research grants that have taken me across the world, and my collection, to me, is both about the passion for collecting and about luck.

You cite Walter Benjamin and his argument that collecting is a kind of “practical memory.” Can you elaborate on how that concept has proven itself in your experience?

Oh, I am so enamored with Walter Benjamin’s writings.  I like to think of collections as creating new histories 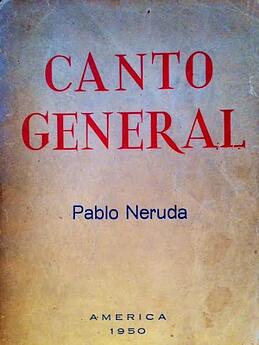 unto themselves while still retaining the traces of their past(s).  My books live in my home and on my bookshelves, but they contain within them both physical traces of the locations from which they came and the readership of anyone who came before me.

What was one of the most memorable days of book hunting you’ve ever had?

My first full day of book hunting in Buenos Aires, without a doubt.  My husband was conducting research for his dissertation at an historical archive, and I was on my own to roam the city.  The night before, I had marked my tourist map with small red dots for every antiquarian shop in Buenos Aires (of which there are many).  I devised a route, and beginning the next morning, I walked through what felt to be the whole of the city.  On that trip, I found my set of Memorial de Isla Negra at Poema 20 on Esmeralda.  After several weeks of this type of flanerie, I had compiled a lengthy list of the bookstores visited, along with a description of the books and ephemera I found in each. 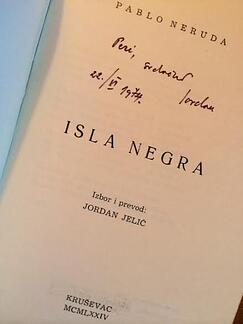 Sara Nial’s book Neruda in Valparaiso catalogues his life there, blending text with both color and sepia images of La Sebastiana and the surrounding seaport city.  The Guillermo Zuniga Dieguez book I found in Guatemala is also really interesting and specific—it features a number of Neruda’s poems alongside local writings about political freedom and social thought.  These are just a couple that come to mind.

Is there anyone or anything in particular that turned you on to collecting?

I don’t know if I can even remember back that far!  For as long as I can remember, I’ve always loved books, and I’ve always loved collecting unique objects.  When I started walking, my parents bought me a wagon that I used as a book mobile.  I’d place all the books I owned in the  wagon, and I’d pull it through the house.  I imagine my passion for book collecting began with this wagon, but I can’t be sure.

Are there any books in your collection that you’re fond of that were not relevant to your paper?

I really do love each one of them.  One of my favorite recent 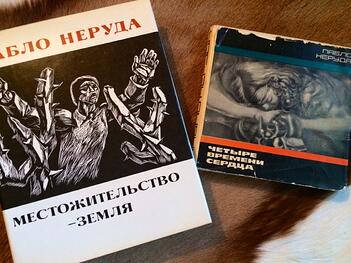 additions to the collection that didn’t make its way into the paper is an item I found in Jeff Maser’s warehouse in Berkeley, California.  It’s a broadsheet of Neruda’s “The Dead in the Square,” printed for the Toronto Antiquarian Bookfair in 1975.  It has Venturelli woodcut images that accompany the text, and it’s currently hanging in my house.

Every book comes with a story. Do any of your books come with an especially interesting one?

When I found my pristine, beautiful Nascimento printing of Antologia in Santiago, the book was a little bit out of my price range (especially as a graduate student), but I loved it intensely.  My husband had gone to a race track in Santiago a few weeks before and had placed a small bet—and won!  He gave me the pesos to buy the book, and it’s still one of my favorites in my collection.

Many thanks to Audrey for sharing her collection with us. Please feel free to respond to Audrey in the comments section below.