Annie Dillard and the Influence of Henry David Thoreau

"It's not what you look at that matters, it's what you see." -Henry David Thoreau

Contemporary writer Annie Dillard draws great inspiration from legendary author Henry David Thoreau. Her crowning work, Pilgrim at Tinker Creek, is often compared to Thoreau's Walden, for good reason. Here, we briefly explore Dillard's life and work to learn more about how she's both similiar to and different from Thoreau. Annie Dillard was born on April 30, 1945 in Pittsburgh, Pennsylvania, the oldest of Frank Doak's and Pam Lambert Doak's three daughters. Her full name was Meta Ann Doak, although she always went by Annie. She attended Hollins College, a women's college in Roanoke, Virginia, where she met and married her first husband Richard Dillard who was her writing professor. The two became engaged during her sophomore year and were married in the summer of 1964. She graduated with her B.A. in English in 1967 and went on to pursue an M.A. in English at Hollins, which she earned in 1968. She has had a distinguished career. She's taught at both Western Washington University and Wesleyan University, published 15 books, and received honors ranging from the Pulitzer Prize to the John Simon Guggenheim grant.

Considered one of America's greatest writers, Dillard is often compared to Henry David Thoreau, especially for her 1975 Pulitzer Prize winning book, Pilgrim at Tinker Creek, which launched her to literary fame at the age of 29. In a recent article in The Atlantic titled "The Thoreau of the Suburbs", writer Diana Saverin says, "In many ways, Pilgrim reads like an updated version of Walden, and that's exactly the kind of book Dillard was trying to write."

Dillard makes no secret of the fact that she has been greatly influenced by Thoreau, whom she started reading as a teenager. Her 1968 master's thesis was a forty-page study of Walden titled, "Walden Pond and Thoreau." In the article mentioned above, Saverin points to notes Dillard made to herself while working on Pilgrim in which she writes, "Remember HDT's [Henry David Thoreau's] alternation of chapters with solitude + society, light and dark, indoors and outdoors, etc. How to do this?" Thoreau's influence on Dillard even reaches past her writing life and into her personal life. Dillard's current husband, Robert Richardson is a Thoreau biographer, and the two became romantically involved after Dillard wrote him a fan letter about his book Henry Thoreau: A Life of the Mind.

However, unlike Thoreau, Dillard never isolated herself for an extended period of time in the wilderness, a common misconception made about the time she spent writing Pilgrim at Tinker Creek. Many an online article will tell you that, much like Thoreau, Dillard retreated to Tinker Creek to live in solitude for an entire year. This is not the case. Rather, she wrote Pilgrim while living in a Roanoke neighborhood with her then husband, Richard Dillard. In fact, she wrote the manuscript for Pilgrim in the library of Hollins College, not while sitting on a log beside the creek, as is sometimes thought. 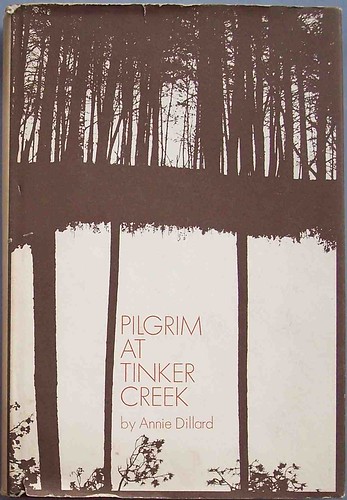 Pilgrim was based on a journal of observations about nature that she'd kept while researching natural history and taking walks around her neighborhood. She says of the Pulitzer Prize winning book, "I didn't say, 'I walked by the suburban brick houses. Why would I say that to the reader? But when I saw that reviewers were acting like it was the wilderness, I said, 'Oh shit.' So the first thing I wrote after was 'The Weasels' [Living Like Weasels]. I said in it, "This is, mind you, suburbia.' Because I hadn't meant to deceive anybody. I just put in what was interesting." Truly, Dillard epitomizes what Thoreau stated so eloquently: "It's not what you look at that matters, it's what you see."

Since writing Pilgrim at Tinker Creek, Dillard has gone on to write on many subjects including history, metaphysics, and theology, and she's penned two novels and numerous poems. Dillard's husband, Robert Richardson, says of her: "She is, like Thoreau, a close observer; she is, like Emerson, a rocket-maker; her works' prose structures and aims, however are all her own."

Her most recent book The Maytrees was published in 2007 by Harper Collins.