Is Mahatma Gandhi the ultimate figure from the Indian subcontinent to represent nonviolence in the quest for justice and equality? Although popular history generally upholds Gandhi to be a figure of veneration, particularly when we think about the long and arduous path to decolonization and independence, the Booker Prize-winning author Arundhati Roy recently accused Gandhi of class prejudice. Let’s take a closer look at the events that led to Roy’s accusation.

Who is Arundhati Roy, and Should We Listen to Her Critique?

Arundhati Roy’s first novel The God of Small Things (1997) earned her international acclaim, both from readers and critics throughout the English-speaking world. Roy grew up primarily in Tamil Nadu and Kerala before leaving to study at the School of Planning and Architecture in Delhi. Her first novel, a semi-autobiographical narrative, traces the stories of fraternal twins in Aymanam amidst political strife in India, including that imposed by the caste system. Since publishing The God of Small Things, Roy has been a notable political activist in the country, speaking out on matters of globalization and present-day imperialism.

So what did Roy have to say about Gandhi? In a talk at Kerala University in Thiruvananthapuram, the novelist argued that Gandhi discriminated against others based on the caste system and that the country should cease naming institutions of higher learning after him. Specifically, she said, “it is time to unveil a few truths about a person whose doctrine of nonviolence was based on the acceptance of a most brutal social hierarchy ever known, the caste system.” She went on to ask those in the audience, “do we really need to name our universities after him?”

Roy’s accusations speak to concerns over Gandhi’s position on the caste system. In general, Gandhi’s views — whether he supported the caste system or, at least, failed to take a stance against it — have been the subject of argument in Indian history.

The caste system isn’t something new to the subcontinent. To be sure, it has been around for thousands of years. Yet it continues to result in brutal discrimination against so-called untouchables, or Dalits, and it still promotes social segregation. Although discrimination based on one’s position in the caste system is illegal in India, the recent history of prejudice remains well-known in the country.

Can a novelist and political activist like Roy provide a legitimate critique of Mahatma Gandhi’s legacy? While writers of imaginative literature, at many important historic moments, have provided necessary critique of the contemporary political climate, Roy’s accusations have been tempered within India and abroad. 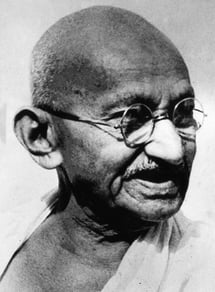 Roy’s comments weren’t taken well by Gandhi’s descendants or by historians of the subcontinent. According to Tushar Gandhi, the great-grandson of Mahatma, “being outspoken is one thing but being so blasé about your ignorance is quite another.” Indeed, Tushar Gandhi accused Roy of making her comments in a publicity ploy.

Academics, too, have discredited Roy’s language. For example, Professor Mridula Mukherjee, an historian of modern India at Jawaharlal University, emphasized that “Gandhi devoted much of his life to fighting caste prejudice.” Mukherjee explained that Gandhi “was a reformer...within the Hindu religion,” and “his effort was in keeping with his philosophy of nonviolence and bringing social transformation without creating hatred.”

What is Gandhi’s legacy in modern India? Given that Roy is one of the most prominent contemporary novelists still living on the subcontinent, we might take her words seriously, even if we ultimately disagree. At the very least, her accusations against the great twentieth-century thinker suggest that the relationship between fiction writers and politics remains feverishly intertwined in contemporary India.