“Whosoever shall carry off this tablet, or shall inscribe his name on it, side by side with
mine own, may Ashur and Belit overthrow him in wrath and anger,
and may they destroy his name and posterity in the land”
- King Ashurbanipal, Assyria, circa 7th Century BC

The above is one of the first known instances of a book curse, a practice used widely throughout the centuries to instill the fear of god(s) into would-be book thieves. Some Medieval Spanish manuscripts contained threats of excommunication and damnation the likes of which make the wrath of Assyrian gods Ahur and Belit seem positively tame, and bookstore owners across the world have poured grim wit and poetry into similar practices aimed at warding off shoplifters. For those of us who are protective of our books, there can be a certain charm to the notion of laying curses at the feet of those who would spoil our collection, but book curses are hardly the only thing for which bibliophiles owe thanks to Ashurbanipal. 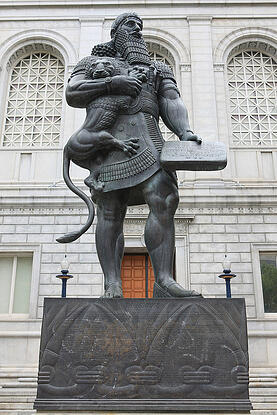 Born in 685 BC, Ashurbanipul was the last effective king of the Neo-Assyrian Empire. He was the second of five brothers, and originally not slated to take the crown upon the death of his father, the king. As a result, his upbringing was not as narrowly focused on producing a suitable monarch, and thus typical royal pursuits like hunting, riding, and decorum were coupled with activities of a more scholarly nature, from mathematics and divination to reading and writing. Upon his eldest brother’s untimely death, Ashurbanipul was thrust atop the line of succession. When he was finally crowned king in 668, it is likely that he was the empire’s first literate monarch.

This combination of unparallel military prowess (his brutality on the battle field was notorious) and economic might proved a heady mix for the scholarly Ashurbanipul, and it led the formation of a tremendous library in the city of Nineveh. With his training as a scribe and propensity for reaping books as spoils of war, this Assyrian king was ultimately able to amass a collection of more than 30,000 cuneiform tablets, comprising more than a thousand distinct texts, ranging from political theory to literature in both Akkadian and Sumerian script. Little wonder, then, that he is often considered the world’s first bibliomaniac.

While his creation of book curses is a testament to his passion, Ashurbanipul’s library made no inconsiderable impact on the worlds of libraries and book collecting. It may not have been the first library of its kind, but it was likely the first of its size to use organizational structures common to modern libraries such as dividing books amongst multiple rooms by topic. When the remains of the library were discovered by Hormuzd Rassam in 1853, the surviving volumes yielded not just considerable insight into the inner workings of cuneiform writing and Assyrian culture, but also the text of the Epic of Gilgamesh: now considered the world’s first literary classic. While Ashurbanipul’s compulsive book collecting may have become a detriment to his mental health (as per the definition of bibliomania), it proved to be a wellspring of discoveries for the moderns lucky enough to delve into similar madness.