The Friendship of Wilkie Collins and Charles Dickens

On January 8, 1824, author Wilkie Collins was born. He'd rise to veritable stardom as one of England's best loved authors. Collins enjoyed the tutelage and collaboration of "the inimitable" Charles Dickens, who would become a fast friend to Collins.Dickens and Collins met in March 1851, while Collins was still a law student. The two were introduced by their mutual friend, artist Augustus Egg. Dickens had also known Collins' father, William, a landscape painter and member of the Royal Academy. Dickens immediately invited Collins to play in his amateur theatrical productions. 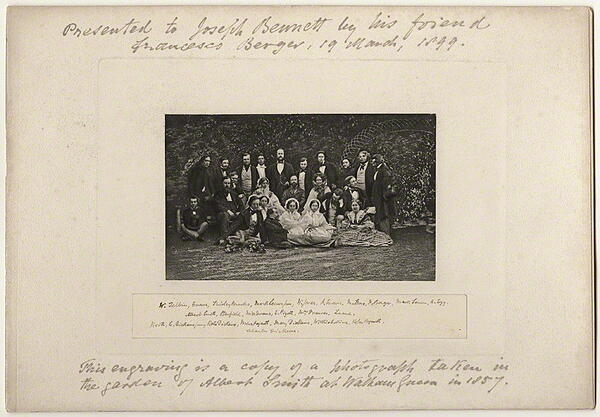 This group shot, from the National Portrait Gallery in London includes Dickens, Collins, and Egg, along with Clarkson Stanfield.

In April 1852, Collins published "A Terribly Strange Bed" in Household Words and cemented his friendship with Dickens. That September found the pair on holiday together in Dover. They traveled again the following year, this time along with Augustus Egg. Though Collins dressed more shabbily than Dickens would have preferred—and seemed always to be singing off key—Dickens would still later invite Collins to visit him in Paris.

In January 1855, Dickens invited Collins to join in his holiday plays, which were performed for friends and family. Collins starred in the performance of The Lighthouse. For many years afterward, the two authors' lives would be intertwined—both personally and professionally. That performance set the tone for the two authors' successful collaboration on The Frozen Deep (1856). They would go on to work together on numerous stories for holiday editions of Household Words and later All the Year Round.

Meanwhile, Collins' brother Charles was courting Dickens' daughter Katie. The two soon married; now the two authors were even family. They shared their deepest secrets. Dickens confided to Collins about his affair with actress Ellen Ternan, and Collins would share details of his various sexual escapades. Dickens and Collins were so often seen together that Collins earned the nickname "Dickensian Ampersand."

Although Dickens was only 12 years older than Collins, he had considerably more experience as a writer. He'd already delved into journalism, written numerous short stories, and made a name for himself as a novelist. Now, he helped Collins gain the same critical acclaim. Dickens broke with Household Words and started All the Year Round in 1859, and he invited Collins to join him. The first installment of Collins' The Woman in White ran alongside the last installment of Dickens' Tale of Two Cities.

Though Collins' novel earned mixed reviews from critics, it also considerably bolstered sales of All the Year Round. Soon Collins was almost as well known (and paid) as himself—quite a feat in Victorian England. After Collins fulfilled his obligation to the periodical in 1862, he sold the rights to No Name for a whopping £4,600. Dickens lured Collins back to publish The Moonstone serially. Though Dickens wasn't as enthusiastic about this novel, the tale again bolstered sales for All the Year Round.

By the late 1860s, Collins' health had declined substantially, in no small part due to his cavalier lifestyle. He suffered from gout, rheumatism, and a nasty opium addiction. He'd also taken up a rather unusual domestic arrangement. Collins didn't see purpose in the institution of marriage, and he'd become involved with not one, but two women: Caroline Graves and Martha Rudd. Dickens knew about Collins' exploits and disapproved.

Also adding strain to the relationship was the fact that Charles Collins had died (as Dickens predicted), leaving Katie a widow. The two authors became estranged and never fully reconciled. Dickens died in 1870, leaving behind a prolific protege in Collins.