Today marks the anniversary of the birthday of Rudyard Kipling, the world renowned author who brought a new (and often controversial) perspective to British imperialism. During his lifetime Kipling would cross continents, win a Nobel Prize, and befriend the celebrated authors of his day. 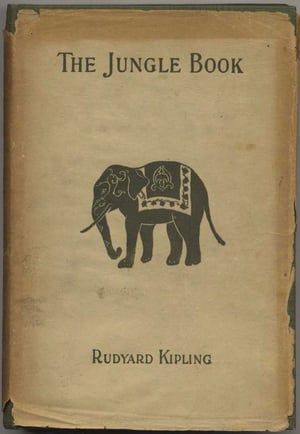 Born Joseph Rudyard Kipling on December 30, 1865 in Bombay, India, Kipling was the child of John Lockwood Kipling and Alice Kipling. John was Principal and Professor of Architectural Sculpture at the Sir Jamesetjee Jeejebhoy School of Art. Alice was known for her wit and vivacity; she and her three sisters were all well loved in their social circles. The pair had met and courted in Rudyard Lake, for which their son was named. They married and moved to India two years later, where Kipling was born. The family considered themselves "Anglo-Indians," a common term for British citizens who settled in India.

When Kipling was five years old, his parents sent him and his younger sister to board with a family in England, which was the custom of the time. Kipling would live with the Holloway family for six harrowing years. He never told anyone about the awful conditions there because he was afraid of the repercussions. But he also said these early experiences probably aided his literary career: the situation, according to Kipling, "made me give attention to the lies I found it necessary to tell; and this, I presume is the foundation of literary effort."

Kipling went on to United Service College, which prepared boys for the British Army. The school would become the backdrop for the stories in Stalkey & Co (1899). After completing his education there, Kipling went back to India to serve as the assistant editor for the Civil and Military Gazette. After several days in Lahore, Punjab (where his parents also then lived), Kipling noted that "my English years fell away, nor ever, I think, came back in full strength." 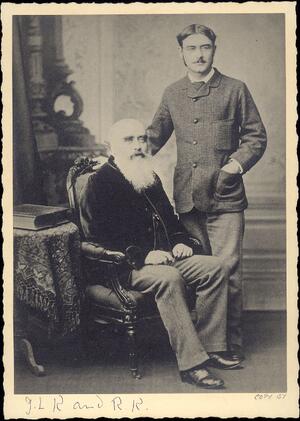 Rudyard Kipling with his father, John Lockwood, ca 1880 (Via)

Kipling called the newspaper his "first and most true love," and indeed he worked hard there. But he still found time to write. In 1886, he published Departmental Ditties, his first collection of prose, and he also began writing short stories for the newspaper. Meanwhile he made his first trip to the hill country, where his father had been asked to take a post. The British Viceroy lived there for six months a year, so the area was a center of both power and wealth. The setting would later figure into many of Kipling's stories.

In 1887, Kipling was transferred to Allahabad, to the much larger sister paper The Pioneer. He continued to write at breakneck pace, publishing six short story collections—with a total of 41 stories—in 1888. He also worked as a special correspondent, writing travel sketches and letters which would eventually be collected in Letters to Marque. The following year, Kipling was discharged from The Pioneer due to a dispute. He received six months pay instead of notice and decided to go back to England, via the United States.

Kipling spent the next several months in North America, meandering from San Francisco up into Canada, then back down to Yellowstone National Park, and finally east to New York and Boston. He met Mark Twain in Elmira, New York, an encounter that deeply impressed him. By the end of 1889, Kipling had arrived in London and made his literary debut. Over the next two years, he'd publish The Light that Failed, have a nervous breakdown, and meet Wilcott Balestier. He and Balestier would go on to collaborate on The Naulahka.

Kipling soon headed south to Australia, New Zealand, and India at the suggestion of his doctors. While away, he proposed to Balestier's sister Carrie via telegram. She accepted. Kipling had to return to England sooner than expected when Balestier died of typhoid fever, and the couple were married at the height of the flu epidemic. Henry James gave Carrie away at the wedding. 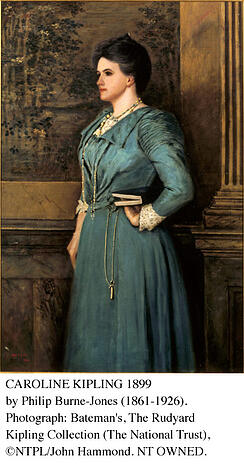 They had planned to honeymoon in Japan, but discovered upon arrival that their bank had failed. Instead, they headed to Vermont, where Carrie's family had an estate. She was already pregnant, so they took a small cabin there. Both daughter Josephine and the idea for the Jungle Books were born in the home which came to be known as Bliss Cottage. The cottage was a little tight for the growing family, so Kipling purchased ten acres of land near the Connecticut River and built a new home there. They called it Naulakha, in honor of Wilcott, and spelled the name correctly this time.

Kipling loved the secluded setting, which promoted his creativity and productivity. He had few visitors, through Sir Arthur Conan Doyle did stay for a few days. He taught Kipling how to play golf.

The family would have stayed here indefinitely, but Kipling decided to leave the U.S. as a result of the growing Anglo-American crisis over the British Guiana border issue and a family dispute with Carrie's brother, which completely destroyed Kipling's privacy.

By the time Kipling and his family set up house in Devon, overlooking the English Channel, Kipling was already famous. Then he published two incredibly controversial poems: "Recessional" (1897) and 'The White Man's Burden" (1899). Both addressed issues of imperialism and the accompanying racism.

Yet the turn of the century and the early 20th century still represented the peak of Kipling's career. In 1907, Kipling was awarded the Nobel Prize for Literature, making him the first English-speaking author to win the award. He was offered knighthood and the honor of Poet Laureate, but turned both down.

Kipling's productivity decreased as he got older, though he kept writing until the early 1930s. By the time he died in 1936, Kipling left behind quite a legacy. Just as Kipling was influenced by Edgar Allan Poe, Charles Dickens, and the legendary authors who came before him, he too influenced the next generation of writers, most notably Edmund Candler. His work remains controversial. Collectors of Rudyard Kipling rely on David Alan Richards' bibliography.

Sources: Kipling's India, Something of Myself and Other Autobiographical Writings