Who's Who: Rare Book Collecting Edition

So Thomas Jefferson, Johnny Depp, and Yoko Ono walk into a book fair...

Have a punchline? Suggest it in the "Comments" section below. But what do all these people have in common? They're all noted rare book collectors. That's right: this pastime isn't just for bookworms and librarians! Here's a look at some of the most famous collectors of rare books.

Jefferson famously said, I cannot live without books, and that sentiment is evident from the library he assembled. A literature lover and polymath, Jefferson amassed a collection so impressive that he eventually sold it to the United States government...to replace the Library of Congress. The original library collection was destroyed during the War of 1812, and Congress purchased Jefferson's library in 1815 for a whopping $23,950. Jefferson immediately began collecting again, but began selling various volumes around 1829 to help pay off his debts.His library was recreated for an exhibit that was intended to be temporary, but it was so popular that the Library of Congress made it permanent. 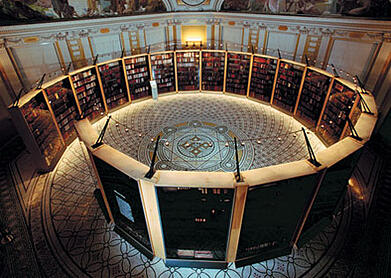 The legendary guitarist from Led Zeppelin has a serious penchant for Aleister Crowley, so much so that he purchased the author's rural home on the shore of Loch Ness. Page, who once owned a bookshop, is also notoriously cautious with his purchases.

Page isn't the only rocker with a bookish streak; Keith Richards often extols the virtues of the public library and has built a rather impressive private collection. Richards, who admits to a secret longing to be a librarian has also purportedly tried to organize his library according to the Dewey Decimal System.

This intelligence agent turned author is famous for writing the first James Bond novels. Fleming was so interested in books that he owned the Queen Anne Press and served on the board of the Book Collector Journal. Fleming focused on works that had a significant impact on Western culture, and his collection was so impressive that many items were featured at the Printing and the Mind of Man exhibition in London (1963). 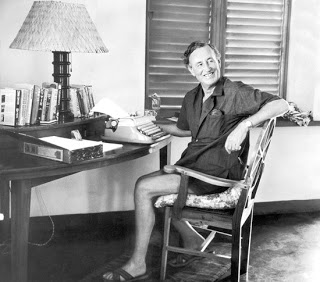 Renowned semiotician, philosopher, and author Eco has assembled a personal collection of over 50,000 books. These are divided between his two residences, in Milan and Urbino. All these volumes compries a sort of anti-library, that is, a collection of books that he has not yet read, and which challenge him to confront what he doesn't know.

One of the titans of musical theater, Kern composed hundreds of well-known songs. He also spent years amassing quite the collection of first and early editions. The collection included legendary authors like Charles Dickens, John Keats, and Henry Fielding. He even owned Shelley's copy of Queen Mab, which the author had heavily annotated. When Kern sold the collection in 1929, it went for a record setting $1,729,462.50.

Yoko Ono is often spotted at rare book fairs, which she thoroughly enjoys. She cites both John Lennon and her father as inspirations behind collecting. Though Ono usually declines to say what kinds of books she looks for, she does enjoy purchasing the books herself and notes that she must really love the book. Ono's interest in books also helped lead her to produce (1964), which has come to be one of the great art books of the late 20th century.

The mogul who founded Priceline.com has built a truly impressive library around a fascinating theme: human imagination. He focuses on three main themes: the natural world; the human body; and life and death. Walker's collection includes medical texts from the fifteenth century, along with the star chart from the Apollo 16 mission, and plenty of other pieces in between. Though he has been spotted at book fairs, Walker maintains a rather low profile. Portions of his collection were exhibited for the first time this year at Cornell University.

A serious comic book buff, Cage, né Nicolas Coppola, even took his new last name from Marvel comic book hero Luke Cage. He recently sold a large part of his collection for over one million dollars. But he's continued collecting, and has been spotted purchasing both comic books and illustrated works.