On December 7, 1933 the United States lifted its ban on James Joyce's Ulysses. Federal Judge John M. Woolsey presided over the Supreme Court case. After taking a month to read the book, Justice Woolsey said that the book was not only not obscene, but was also a work of literary merit. For this 1922 Observer review, Huddleston had to acquire a copy of Joyce's novel from Paris-based Shakespeare and Co, which issued the book to subscribers only.

This case certainly was not the first time that censors had tried to ban a work of literature. Indeed, many great works have incited controversy.

The Satanic Verses by Salman Rushdie

First published in the UK in 1988, The Satanic Verses caused immediate outcry among several Muslim populations. Rushdie was accused of blasphemy, and in 1989 Ayatollah Ruhollah Khomeini of Iran issued a fatwa ordering Muslims to kill Rushdie. The author and his family immediately went into hiding, though Rushdie still made numerous public appearances thereafter. 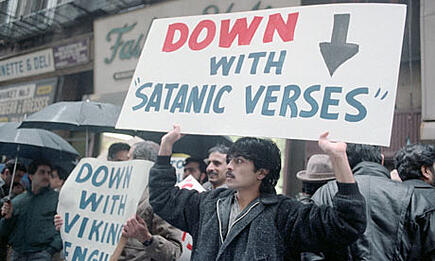 The Iranian government finally stopped backing the fatwa in 1998, but by then several people affiliated with the book's publication had already been attacked or killed. Yet The Satanic Verses met with widespread critical acclaim, making the shortlist for the Man Booker Prize and winning the 1988 Whitbread Award for novel of the year.

According to the American Library Association (ALA), these are currently the most banned books in America. The Harry Potter series have been taken off shelves across the country. Parents and religious group complain that the books promote paganism and the occult. But though the books' literary merit sometimes falls under scrutiny, no one can deny that they stimulate educational reading and discussion among kids. Indeed, over 450 million Harry Potter books have sold around the world.

Ernest Hemingway said that all modern American literature comes from one book by Mark Twain called Huck Finn. Yet when the novel was published in 1884, it met with controversy which continues to this day: the ALA ranks Huck Finn as the fourth most banned book in the US.

Initially critics noted that Twain's humor was not for most women and pointed at the use of obscenity. The book has also been descried for its use of racist language and portrayals of slavery. A recent edition of the book even removed potentially offensive language in an effort to sanitize the novel. However Twain's Huckleberry Finn remains on school and university reading lists all over the world.

The Lord of the Rings Series by JRR Tolkien

Perhaps the most beloved fantasy books of all time, the Lord of the Rings series has met with widespread censorship for being irreligious. In 2001, a local group in Alamagordo, New Mexico even burned a large pile of the books outside a community church.

What's ironic is that Tolkien was actually a devout Catholic, and he wrote to colleague CS Lewis that Lord of the Rings was a fundamentally religious and Christian work. These bans haven't halted the books' growing popularity, as evidenced by the successful film series and continued strong sales of the books.