Celebrating a Legend in Sci-Fi and Adventure

From Humble Beginnings to Cultural Icon

Burroughs grew up outside Chicago, where he attended local public schools. During the Chicago influenza epidemic of 1891, he spent several months at his brothers ranch before returning home. After graduation (1895), Burroughs applied to West Point but failed the entrance exam. Instead he enlisted, only to be discharged for a heart defect two years later.

Burroughs then worked several odd jobs before landing a job selling pencil sharpeners. The work left Burroughs dissatisfied--and bored. He passed hours reading pulp fiction magazines and eventually decided that he could write stories just as rotten. Burroughs set about writing stories for these magazines, and Under the Moons of Mars was published in 1912. The storys success prompted Burroughs to take up writing full time.

By the end of that year, hed finished his most successful novel, Tarzan of the Apes. Published in October, the novel proved a smashing hit. Burroughs resolved to capitalize on this success and opted to leverage different media, from comic strips to television shows. Experts advised that Burroughs would merely split his audience, but the opposite proved true; Tarzan thoroughly captivated the nation and soon became a pop culture phenomenon.

A few years later, Burroughs purchased a large parcel of land near Los Angeles, California. He named the property Tarzana after the jungle hero whod brought him so much prosperity. A community formed around the ranch and eventually took the same name. The area was officially incorporated as Tarzana in 1927.

Meanwhile, Burroughs continued writing sci-fi novels like his popular Barsoom series (set on Mars) and the Pellucider series (set inside a hollow Earth). He tried his hand at westerns and even a few historical romances. These stories appeared not only in All-Story Magazine, where his first story had been published, but also in The Argosy. By 1930, Burroughs was able to begin publishing his own books through Edgar Rice Burroughs, Inc (est. 1923). 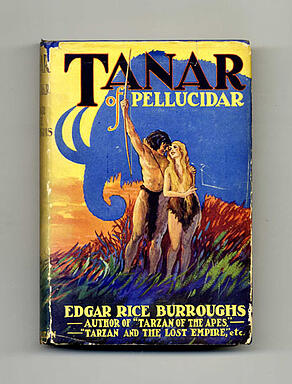 By the start of World War II, Burroughs had taken up residence in Hawaii. The attack on Pearl Harbor inspired him to service as a war correspondent. Despite Burroughs age, his request to serve was granted, making him one of the oldest war correspondents in the United States during World War II. After the war, he returned to Encino, California ,where he passed away a few years later. By that time, Burroughs had penned over 70 novels. and numerous short stories.

Because Burroughs was such a prolific author whose works have remained perennial favorites, his works are a natural choice for collectors of rare books. Burroughs collectors rely on Robert B. Zeuschner's descriptive bibliography