Its that time of year when many of us begin to get that itch to get away. Summer is right around the corner, and with it the mystical promise of summer travel. If youre stuck at home this holiday season, or looking for a little inspiration for this years travels, you may find help from a seemingly unlikely source: Mark Twain. Thats right: this titan of American literature got his start as a travel writer.

From young age, Samuel Langhorne Clemens was on the hunt for adventure. His family lived in Hannibal, Missouri, a bustling town right on the Mississippi River. The city had a shiny veneer of excitement, with performers and merchants constantly coming into townbut it also had a dark underbelly. By the time he was 10, Samuel had already witnessed two murders. The city of Hannibal would serve as the backdrop for bothThe Adventures of Tom Sawyer and Adventures of Huckleberry Finn, albeit under the name of St. Petersburg. 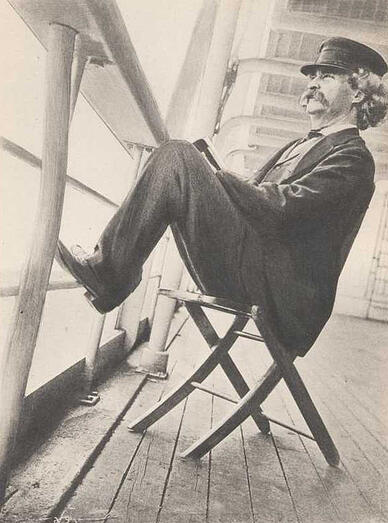 Though Clemens first job was working for his older brothers newspaper, he soon found another calling: piloting steamboats. By 1859, he had his license and loved the work. The position was exciting, lucrative, and rather high status. Clemens had managed to find his adventurein his own back yard. (The pseudonym Mark Twain is steamboat slang for twelve feet of water.) But when the Civil War broke out in 1861, travel up and down the river halted. Clemens had to look for a new source of excitement.

Naturally he headed out West to Nevada and California. Clemens fully expected to strike it rich panning for gold or silver. Instead, he ended up penniless by mid-1862. In September he took a job writing for the Virginia City Territorial Enterprise. It was here that he first adopted his pen name. It was also while working here that Twain got his first big break. In 1865, Jim Smiley and His Jumping Frog was published in newspapers and magazines across the country (often under different tiles). The tale of mining life was one of Twains first forays into travel writing. From then on, Twains travel writing gained nationwide attention:


Twains works are considered some of the greatest travel works of the 19th century and are still widely read today. Rare book collectors and travel enthusiasts alike appreciate Twains wit and ingenuity.