The holidays have arrived, and with the season come hectic schedules. It can be easy to lose sight of the joy and celebration that also accompany this time of year. Our favorite childrens Christmas books beautifully capture those themes.

When Clement Moore penned A Visit from St. Nicholas in 1822, he had no idea that the poem would endure for over a century. In fact, the piece was first published anonymously. It was only later that Moore acknowledged authorship. We now know the poem as Twas the Night before Christmas, and many families now read it every Christmas Eve.

Childrens illustrators are frequently inspired by this beloved tale. Tasha Tudors rendition is particularly lovely.  Renowned pop-up artist Robert Sabuda also created a wonderful limited edition of the book that people of all ages will cherish. 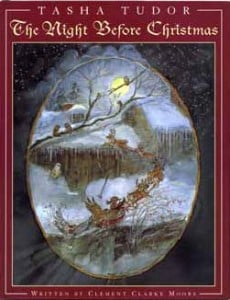 Modern authors and illustrators have followed in Moores footsteps, including many Caldecott winners. Theyve introduced new stories to our Christmas traditions:
Which childrens Christmas books are favorites in your family?