This year Alan Noel Latimer "Tim" Munby would be 100 years old and the ABAA recently blogged about an upcoming conference at King's College to mark Munby's centenary year. Bibliophiles and rare book collectors around the world are anticipating the event, and it's the perfect time to explore Munby's contributions to bibliography, collecting, and authorship. 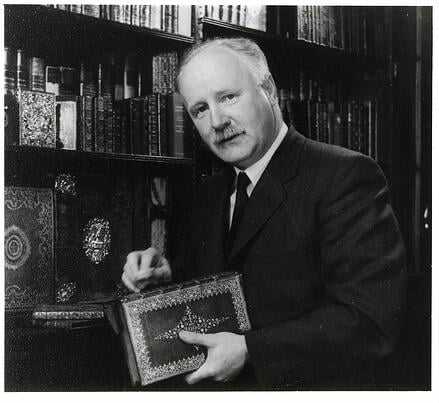 Born in Hampstead, Munby was educated at Clifton College and King's College, Cambridge. Though he began as a Classics major, he switched to English, which was then a relatively new subject of concentration. Munby made indifferent marks in school, but went on to join respected antiquarian bookseller Bernard Quatrich, Limited (1937-9). He moved to Sotheby and Company, where he stayed until the start of World War II.

Munby more than made up for his lackluster marks at university by his ensuing scholarship. He became Librarian at King's College in 1947 and Fellow in 1948. Munby was also the JPR Lyell Reader in Bibliography at the University of Oxford (1962-3) and the Sanders Reader in Bibliography at the University of Cambridge (1969-70). A co-founder of the British Library Society, Munby was an Honorary Feollow at the Pierpoint Morgan Library and Visiting Fellow at All Souls College, Oxford. He was elected President of the Bibliographical Society in 1974, but passed away before completing his term.

Meanwhile Munby wrote The Cult of the Autograph Letter in England (1962), The Libraries of English Men of Letters (1964), and Connoisseurs and Medieval Miniatures (1972). He dedicated himself wholeheartedly to documenting outstanding book collectors of the nineteenth century. Most notable was his study of Thomas Phillipps, whose bibliomania led him to amass over 40,000 books and some 60,000 manuscripts. Munby truly revolutionized the historical study of book collecting, using catalogues to trace changes in collectors' taste in books

Yet before Munby earned a reputation as a bibliographic scholar, he established himself as an author. While he was a prisoner of war at Eichstatt in Upper Franconia during World War II, Munby penned a series of ghost stories that he'd later publish in The Alabaster Hand and Other Stories. Writing the stories offered him an escape from the monotony of internment.

Munby looked up to his predecessor, MR James, who'd established himself as a preeminent author of supernatural fiction before Munby was even old enough to read James' stories. Yet Munby was profoundly influenced by--and indebted to--James as a writer. He included a dedication to James in Latin in The Alabaster Hand, and consistently evokes James' writing in his own.

The upcoming conference, "Floreat Bibliomania-Great Collectors and Their Grand Designs," will certainly be a wonderful way to remember Tim Munby. If you're unable to attend, King's College also offers a lovely gallery of photos from Munby's life.

How did you first encounter Munby? Share your impressions of him in the comments below.