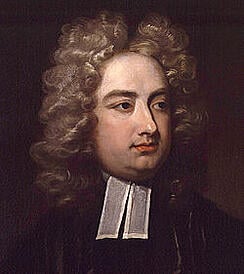 Jonathan Swift originally published either anonymously or under the pseudonyms Lemeul Gulliver, Isaac Bickerstaff, or MB Draper. His father died before he was born, and his uncle Godwin Swift raised him. Eventually Swift ended up at Moors Park, where he met an eight-year-old girl named Esther. The girl was a companion to Lady Gifford, and Swift became her tutor. He nicknamed her "Stella." He and Esther would have a close (and ambiguous) relationship for the rest of Esther's life. Swift was one of the founding members of the Martinus Scriblerus Club, along with Alexander Pope, John Gray, and John Arbuthnot.

The date and location of Oliver Goldsmith's birth are uncertain, though he once gave his birthday as 10 Nov 1728. An indifferent student, Goldsmith graduated from Trinity College at the bottom of his class. Instead of studying, he'd developed a love for fine clothes and gambling. After several odd jobs and a brief stint studying medicine, Goldsmith went on a walking tour of Europe. He supported himself by busking with his flute. Goldsmith settled in London in 1756 and soon became a hack writer to support his constant gambling debts. His more thoughtful works earned the notice of Samuel Johnson. The two founded "The Club" together. Thanks to his dissolute lifestyle, Horace Walpole called Goldsmith the "inspired idiot."

Now best known for his novel Dracula (1897), Bram Stoker was better known in his own lifetime for his role as personal assistant to actor Henry Irving. Stoker also served as the business manager for the London's Lyceum Theatre, which Irving owned. Few people know that Stoker was an incredibly sickly child; he did not even stand upright until he was seven years old. He was also an ardent fan of Walt Whitman. After reading Leaves of Grass, Stoker was so moved that he penned a 2,000-word letter to Whitman. The two would go on to become lifelong friends.

Oscar Wilde's full name was actually Oscar Fingal O'Flahertie Wills Wilde. His mother, Jane, was a successful author in her own right and published under the pen name "Sperenza." Wilde grew up to be a devoted socialist. His single political essay, "The Soul of Man under Socialism," (1891) explores the philosophy of anarchism.

Wilde's dying words were "My wallpaper and I are fighting a duel to the death. One or the other of us has to go."

George Bernard Shaw hated his given name and generally went by just "Bernard Shaw." Shaw nearly died of smallpox, but went on to publicly oppose the smallpox vaccine. Shaw, a committed vegetarian, also subscribed to the popular theory of eugenics. He co-founded the London School of Economics with Sidney Webb, Beatrice Webb, and Graham Wallas. George Orwell once asked Shaw for permission to quote his work during a BBC interview, and Shaw replied, "I veto it ruthlessly." He generally rejected any public acknowledgement, turning down multiple awards in his lifetime. Shaw accepted the Nobel Prize only because his wife insisted, saying that it would bring honor and recognition for Ireland.

James Joyce famously suffered from multiple phobias, which grew from childhood traumas. His cynophobia (fear of dogs) was thanks to an attack from a neighborhood dog when Joyce was four years old. His keraunophobia (fear of lightning and thunder) arose when a religious aunt insisted that thunder and lightning were God's display of wrath toward humankind. Joyce's childhood and adolescence impacted his work, though it was perhaps his early adulthood that is most memorialized—in Ulysses. The date of that book was the date on which Joyce had his first date with his wife, Nora Barnacle. The couple had two children, Giorgio and Lucia. Lucia went on to date Samuel Beckett and become a patient of Carl Jung.

William Butler Yeats, active in the Irish Literary Revival, founded the Irish Theatre (later the Abbey Theatre) with Lady Gregory. He served as the principal playwright there until John Synge joined the revival movement. Yeats' later plays were heavily influenced by the Japanese Noh tradition. Meanwhile Yeats was profoundly interested in getting approval from James Joyce. He once offered to read Joyce's poetry. Joyce's rebuff was quite harsh:

"I do so since you ask me, but I attach no more importance to your opinion than to anybody one meets on the street."

The first of nine children, Heaney discovered poetry at Queen's University, in Ted Hughes' Lupercal. Heaney had been born and raised in Northern Ireland, and as he developed his own authorial voice, he remained committed to emphasizing that he was not British, but Irish. In the late 1980s and the 1990s, Heaney's poetry readings were so well attended that the enthusiastic fans earned themselves the nickname "Heaneyboppers."

In 2003, Heaney praised rapper Eminem for creating interest in poetry and lyrics, "he has created a sense of what is possible," Heaney said, "He has sent a voltage around a generation. He has done this not just with his subversive attitude, but also his verbal energy." When Heaney was named Nobel Prize winner, he was nowhere to be found. Two days later he popped up with his wife at the Dublin Airport. They'd been vacationing in Greece.

Though born in Brooklyn, Frank McCourt grew up in Ireland, in extreme poverty. When he was 13, the Irish Christian Brothers ejected McCourt from school, and he started taking odd jobs. In October 1949, McCourt left Ireland with money he'd saved. On the ship bound for America, McCourt befriended a priest, who helped him find a place to stay and a job at the Biltmore Hotel in New York. McCourt made $26 a week and sent $10 of that home to his mother. Later, he was drafted into the Korean War, where he trained dogs and served as a clerk. After Angela's Ashes was published, several individuals—including McCourt's own mother—accused McCourt of having greatly exaggerated his family's poverty.

In 2004, Roddy Doyle created quite a stir when he admitted that he hadn't bothered to read James Joyce's Ulysses. He went on to say that reading Finnegan's Wake had been "a tragic waste of time."

Before starting his writing career, Doyle was an English and geography teacher. He later established a creative writing center, "Fighting Words," modeled after Dave Eggers' 826 Valencia project in San Francisco.