Of John Updike and Vladimir Nabokov

Today we celebrate the birthday of John Updike, whose uncanny ability to write beauty into the mundane earned him numerous literary accolades and a position as one of America's legendary authors. Updike drew influence from a wide variety of authors, but it is perhaps Vladimir Nabokov who most profoundly impacted Updike's work. Though the two authors never met, they openly admired one another's work.

Though Nabokov was a guest lecturer at Harvard while Updike was there, Updike never went to see him speak. He noted that he had no idea there was such a master on campus. He later caught one of Nabokov's readings at Cambridge. But Updike's wife took Nabokov's lectures at Cornell, and Updike says that "she was really [Nabokov's] student, not me." It was not until Updike read Lolita that he came to appreciate Nabokov as an author: "I'd never seen writing quite like this before, writing so precise and witty, and so full of little surprises."

The quality that Updike admired most in Nabokov's writing was the joy and happiness it contained. In 1964, Updike noted that "Nabokov writes prose the only way it should be written: ecstatically." He observed that although Nabokov's works contain plenty of death, they also present death as a transition to immortality. Here, then, we see Nabokov as lepidopterist, pinning down the butterfly for permanent preservation.

Updike looked to Nabokov as a mentor as much for his writing style as for his approach to writing as a craft. Updike admired Nabokov's dedication and attention to detail, and he strove to achieve these same qualities. Updike also sought to move forward "a mass of images" as Nabokov did. But he didn't blindly follow--or praise--his mentor. Though most of Updike's reviews and memorials of Nabokov are glowing, he critiqued Ada, a more stylistically obscure work. 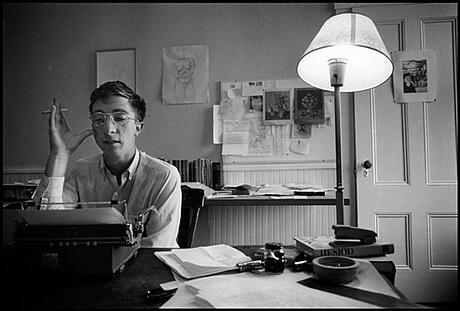 Updike would incorporate elements of Lolita into his own works, especially the romance between a mature intellectual and a young but sexually mature woman. Rabbit, Run contains the same themes of jealousy as Lolita. But he also sought to adopt Nabokov's ebullient writing style.

Meanwhile Updike also praised Nabokov for something we don't often equate with great authors: his ability to handle publicity and fame. He recalls the way that Nabokov sashayed about in his black cape, with his wife trailing behind, delivering performances that were "scarcely precedented in American literature." Nabokov's style of self-interview further set him apart from other celebrity writers; he refused to do a live interview, instead reading from his ever-present index cards.

Why does it matter to Updike collectors that Nabokov influenced Updike? From a pragmatic standpoint, Updike wrote plenty about Nabokov, and these pieces should be in any completist's Updike collection--as should, perhaps, Nabokov's works themselves and those of Updike's other influences. Placing Updike's books in a collection alongside these other works brings a new depth, contextualizing the texts themselves.

Another useful tool for collectors of rare John Updike books is the bibliography by Jack De Bellies and Michael Broomfield. It includes both primary and secondary materials, from 1948 to 2007, making it an indispensable reference guide.

Lila Azam Zanganeh interviews Updike on Nabokov, politics, and why he wrote a book about a terrorist. Read the full transcript in Guernica.

Garrison Keillor offered homage to Updike in a reading for The Writer's Almanac. Listen online.