The Reiner Script at Heavenly Monkey

From the Blog of Heavenly Monkey in 2011.  A new arrival in our store.

Heavenly Monkey? Heavenly Monkey is the imprint of publisher Rollin Milroy, dedicated to creating books for people interested in contemporary applications of traditional book crafts: handmade papers, letterpress printing, and bindings that emphasize both aesthetic and structural integrity. Our books are designed as objects to be experienced both intellectually and physically; innovative use of technology from any era, and its skillful application are the studio's guiding principles.

Spent the weekend printing a pair of broadsides displaying the font of 24-pt Reiner Script majuscules given to us last month. Found a couple of quotes from designer Imre Reiner that suited our need. There wasn't enough type to set everything (particularly the story of how the type came to us, included in the colophon), and so the text portions were printed from polymer.

Initially we couldn't decide which of the two quotes we'd found to use; the sentiments are very different (one being cheerful, the other existential). After much pondering, we decided to print both simultaneously, two up, on a single foolscap sheet of Reg Lissel's paper (seconds and extras left over from previous projects). Trimmed down, the final broadsides are 8.5 by 12.5 inches. 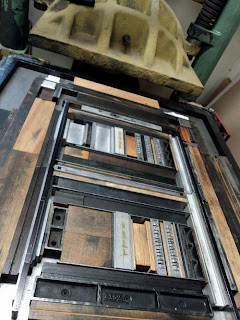 The red was printed on Saturday, the black on Sunday. Setting Imre's name in all caps would have been too heavy for the page, so that line is polymer. We had to trick up a base for these single lines, which we did by turning a piece of aluminum furniture on its side and raising it to the appropriate height with one 2-pt lead, one 1-pt lead, and a slip of tissue paper. 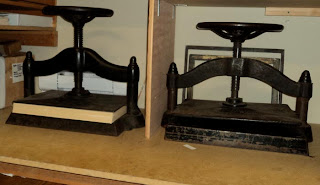 This was the first printing we've done since the joyous arrival of our newest piece of equipment, a second folio-sized press for use in the dampening and drying of paper. Up till now we'd had just the one on the left, and this sometimes became the bottleneck during printing: after being dampened, sheets are pressed over night. Once printed, sheets are pressed (between drying boards) to dry (those are the completed Reiner broadsides in the photo). Thus, on the day a sheet is completed, it needs to go into a press. But that's also the day paper is being prepared for the next run. You can see the problem. With the second press, we now have one dedicated to dampening, and one to drying. 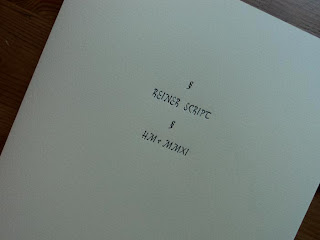 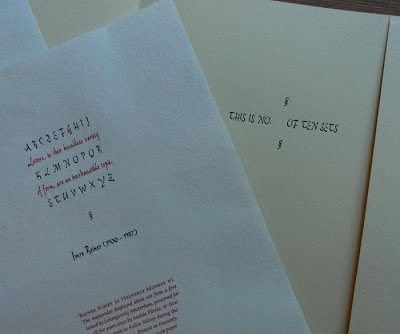