A Brief History of the Franklin Press

The Franklin Press was established in Philadelphia in 1973, where it remained until closing its doors in 2000. All books were designed and bound by The Sloves Organization, one of the few binderies solely dedicated to fine leather book binding. The Franklin Library offered classic titles assembled into 50-100 volume series. People who subscribed to the series would receive one book per month, so it often took years to accumulate an entire collection.

The Franklin Press used three different binding styles: full leather, leather-like cloth, and quarter-bound leather. The last two were used only during the 1970s and 1980s. Full leather editions were available throughout the press' operation. A full leather binding can be differentiated by the satin ribbon page-marker bound into the volume. Although the Franklin Press closed its doors over a decade ago, its books are still sought after by many book collectors. A few reasons why: 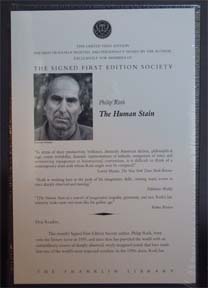 Sometimes the same title appears in more than one series. When this happens, the title will have a different introduction and binding in each series. Thus single-title collectors may end up with multiple Franklin Library editions of the same book in their library--and each will be unique.

Meanwhile, there are also different types of series. Some were produced as signed limited editions (sometimes called the signed 60), while others are merely first editions. It's important to know the difference: first editions include a signed introduction, with the author's signature at the end of the introduction. These signatures are reprinted, not original. For the signed editions, however, authors signed a separate page, which was then bound into the book. These signatures appear on their own and are genuine.

Some series are also more popular than others. Obviously the signed 60 are quite scarce and more sought after. The 100 Greatest Books of All Time series remains one of the most collectible sets, as the titles are generally quite desirable in their own right. The 25th Anniversary of Great Books of the Western World series is also popular.