Rare Books and the Bard

Today we celebrate the birthday of legendary author William Shakespeare, whose works have inspired countless generations of readers and writers. Shakespeare has been adapted innumerable times for various editions and performances, but a perennial favorite among rare book collectors is Tales from Shakespeare (originally published in 1807) by Charles and Mary Lamb. The pair sought to make Shakespeare truly accessible to children through this work. 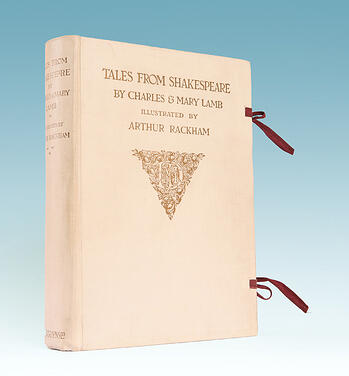 Best known for her collaboration with Charles on Tales from Shakespeare, Mary was also an author in her own right. She published Mrs. Leicester's School, a short story collection, in 1808. The book was quite successful and had reached its ninth edition by 1825. In December 1814, Mary wrote "On Needle-work" for the New British Lady's Magazine. Published under her pseudonym Sempronia, the article argued that sewing should be recognized as a profession because it would give women independence to make a living.

Throughout her life, meanwhile, Mary struggled with mental illness. She stabbed her mother in an acute fit on September 22, 1796. The court returned a verdict of lunacy and released her only with Charles' promise to watch over his sister. Mary would find herself in and out of mental institutions for the rest of her life. When her health permitted, Mary worked as a seamstress. She was also a voracious reader and a frequent patron of the local lending libraries. Following the death of Charles' and Mary's parents, Charles brought Mary to live with him in London, and the two decided they would both remain unmarried and live together for the rest of their lives. Charles described their arrangement as "a sort of double singleness."

Charles' primary biographer, EV Lucas, called Charles "the most lovable figure in English literature." Charles and Mary presided over a circle of minor writers and artists; both Samuel Coleridge and William Wordsworth attended on occasion. Coleridge had attended school with Charles and was likely his oldest friend. The association proved fruitful: Charles' first publication was four sonnets in Samuel Coleridge's Poems on Various Subjects in 1796. These first attempts were rather unremarkable, and although Charles' poetry did improve, he would never achieve the recognition he desired as a poet.

He did, however, earn a sterling reputation as an essayist. Charles' first Elia essay was published in 1820, and he continued to perfect that form over time. Unfortunately his work is no longer en vogue, and he's no longer widely read. Tales from Shakespeare stands alone as his most enduring work.

Charles and Mary began their collaboration in the first few years of the 19th century. They wrote three books for William Godwin's children's library. The second, Tales from Shakespeare, is the most famous. The siblings sought to eliminate the obstacles of archaic language and complicated plot so that the classic tales of Shakespeare would be accessible for a younger audience. They changed the language when necessary, but note in their preface that "[Shakespeare's] words are used whenever it seemed possible to bring them in; and in whatever has been added to give them the regular form of a connected story, diligent care has been taken to select such words as might least interrupt the effect of the beautiful English tongue in which he wrote."

Mary was responsible for adapting the comedies, while Charles wrote the tragedies. They wrote the preface together. Rather than presenting the plays in script form, they were adapted into prose. Scholars attribute the book's success mostly to Mary--even though her name did not even appear on the title page of the first few editions.

Multiple editions of the book have been published. Arthur Rackham illustrated editions in 1899 and 1909. This later printing was published by JM Dent & Co in both a trade edition and a limited edition. The limited edition is particularly beautiful. The white buckram cover closes with rose-colored silk ties, and the endpapers feature gold illustrations. Rackham created 13 full-color illustrations including a frontispiece, and one of these plates is not included in the trade edition. Only 750 copies were printed for sale. This edition, and others of Tales from Shakespeare are sought after by collectors of fine press books, children's books, and Shakespeariana.