"With some venial exceptions on the score of egotism and indiscriminate admiration, his work exhibits the most copious, interesting, and finished picture of the life and opinions of an eminent man, that was ever executed; and is justly esteemed one of the most instructive and entertaining books in the English language"

-Robert Anderson, of Life of Samuel Johnson in Works of the British Poets (1795) 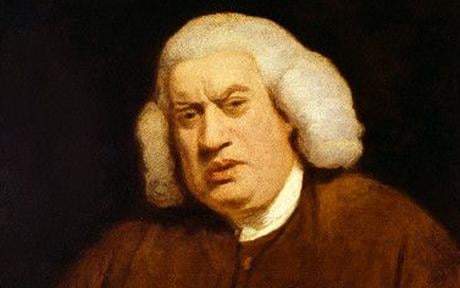 James Boswell published Life of Samuel Johnson in 1791, earning himself the attention and accolades he'd long desired from the literary community. The work is often regarded as the greatest biography in the English language, and it propelled the form of biography into an entirely new, modern direction.

When Boswell met Samuel Johnson, he was only 22 years old. Johnson was already 53. The two met at the book shop of Johnson's friend Tom Davies, an encounter that's been called the "most famous meeting in the history of English literature." The two would eventually become quite close, and Boswell would build his literary reputation around his interactions with Johnson. From their first meeting, Boswell vowed to chronicle his interactions with Johnson and recorded his initial impressions:

"[Johnson is] a Man of most dreadfull appearance He is very slovenly in his dress and speaks with a most uncouth voice. Yet his great knowledge, and the strength of his impression command vast respect and render him excellent company. But his dogmatical roughness of manner is disagreeable. I shall mark what I remember of his conversation."

Boswell recorded details of Johnson's life with such faithfulness, that Johnson noted in a letter to Hester Thrale "one would think the man had been hired to spy upon me." Boswell's journals, discovered and published in the twentieth century, comprised 18 volumes. Boswell would also write an account of his travels throughout Scotland with Johnson. The Journal of a Tour to the Hebrides met with success, encouraging Boswell to undertake the more ambitious work that would become Life of Johnson.

A Titan of British Literature

Samuel Johnson left an indelible mark on British literature as an essayist, novelist, critic, poet, and lexicographer. Outstanding works includethe biography The Life of Richard Savage, poems "London" and "The Vanity of Human Wishes," and the novel Rasselas. But Johnson's masterpiece was undoubtedly his Dictionary of the English Language. Published in 1755, the dictionary took nine years for Johnson to complete. It remained the lexicographical standard until the Oxford English Dictionary was published 150 years later.

Johnson was also known for his odd mannerisms and tics.These were well documented, not only by Boswell, but by other would-be biographers of Johnson. Their prevalence has led some experts to posthumously diagnose Johnson with Tourette syndrome.

Born in Edinburgh, James Boswell was the son of a judge and heir to the family estate of Auchinleck at Ayershire. A sickly child, Boswell left school and was educated by a series of private tutors. He went on to study law, but failed to distinguish himself as an attorney. The one exception was in the copyright infringement case of Donaldson v Beckett, where Boswell represented Scottish bookseller Alexander Donaldson.

Boswell earned some recognition for his accounts of his travels through Europe. This gave him the courage to proceed with his biography of Johnson, which would revolutionize the genre. Boswell departed from the dry, detached tone of traditional biographies to include personal details and colorful tidbits about his subject. He also often took liberties, such as editing what Johnson said or censoring more offensive quotations. Many critics found Bowell an unlikely biographer of Johnson, mainly because Boswell came to know the great author later in his life.

Unfortunately Boswell struggled with both alcoholism and a gambling addiction. By the late 1770's, these vices had negatively impacted both his career and his status in the literary world. He failed to make further notable contributions to literature, leaving Life of Johnson as his crowing achievement.

Life of Johnson is sought after among lovers of British literature, biography, and Johnson himself. Only 1,750 copies of the first edition were printed. Our first edition is a mostly close to Fine example of this landmark set, with all plates present and the booklabels of William Downes and Moreau Delano on marble pastedowns.