The Man Behind the Newbery Medal

The Newbery Medal is given out each year by the American Library Association (ALA) for outstanding achievement in American children's literature (watch for our post announcing this year's winner later this month!). For over ninety years, it has been a significant authority on the reception and evolution of children's books. Its impact is well known. Winning books receive widespread attention in libraries, schools, and book stores, and the publisher is wont to emblazon the shiny medallion on the cover of every printed copy of the winning book. While the award itself receives ample public attention, the man for whom it is named remains relatively obscure.

John Newbery was an eighteenth-century publisher who set up shop in the appropriately named city of Reading, England. Though Newbery was not the first person to publish children's books, he was the first to intentionally make the books appealing to children. Newbery also used innovative marketing and advertising techniques to publicize all his books and products.

Newbery began his career as a conventional publisher, printing books by major writers of his time like Samuel Johnson and Oliver Goldsmith. His first children's book was titled A Little Pretty Pocket-Book, which was met with much success and popularity. This was a critical step forward in proving that publishing for children was a financially sustainable business. Pocket-Book was filled with rhymes and adages and came bound in a colorful cover appealing to children. The book also came with a ball for boys and a pincushion for girls. Sadly, none of these tokens survive. However, records indicated that these items were red on one side and black on the other. When children did a good deed, they got a pin in the red side. When they did a bad deed, they got a pin in the black side.

By modern standards the book was a little heavy on moral instruction, but it nonetheless aimed to instruct children in proper conduct with playfulness rather than discipline.

This attitude of playful interaction over castigation set a standard for the tone of youth literature, especially in the eighteenth century. In this approach, Newbery put the philosophy of John Locke into practice. Locke believed that children could best be educated when they were taught "without perceiving it to be anything but a sport." It's no wonder, then, that Pocket-Book was available for purchase with either a pincushion or a red and black ball (for a mere extra two pence).

A standout publication of Newbery's company was The History of Little Goody Two-Shoes, which is known for having popularized the eponymous phrase, used to describe someone heavily preoccupied with proper etiquette and conduct. The book showed its further investment in moral suggestion by naming its protagonist Margery Meanwell. Margery begins the novel with only one shoe, and has a new pair bought for her by a rich man who admires her civility and manners. This correlation between wealth and good behavior was a popular motif of the time. 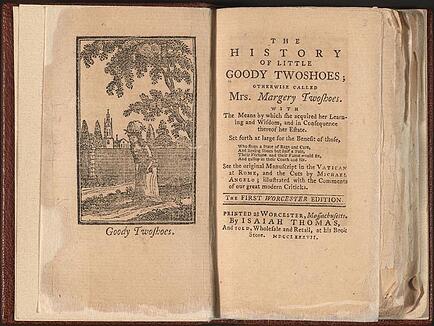 Newbery's life marks achievements that are memorialized with each honoree of the Newbery Medal. He entertained and taught children, but perhaps most significantly, his efforts expanded the reach of literature to a most overlooked group of people. Many readers today would be startled to ponder of a life in which they were not exposed to the pleasures of books at an early age. Newbery's legacy shows that there are books for everyone, whether big or small.

Now collectors of children's books love Newbery Medal-winning books because they represent some of the finest examples of children's literature from the twentieth century. You can even build an entire collection around Newbery winners. To that end, our Newbery collector's guide includes a brief biography of John Newbery, along with comprehensive collecting information. You'll find plot summaries, first edition identification information, cover images, and other important details for discerning collectors.