So You Think The Cuckoo's Calling?

Now that was quite something.  Well done, Robert Galbraith.  Phenomenal debut novel with an interesting start...except Robert Galbraith isn't a new novelist, but rather the pseudonym of legendary author J.K. Rowling.

After being rejected by Orion books, The Cuckoos Calling, a whodunnit submitted by a former military man calling himself Robert Galbraith, was eventually taken on by Sphere and first published in Great Britain in April 2013.  Shortly thereafter, the first North American edition was published by Mulholland Books/Little, Brown and Company.

Rowling must have enjoyed this.  After her cover was blown in early July, she said that she had hoped to keep this secret a little longer....Being Robert Galbraith has been such a liberating experience. The author said. It has been wonderful to publish without hype or expectation, and pure pleasure to get feedback under a different name.

Enjoy the debut novel with the seasoned writing by J.K. Rowling.  While it might not see the phenomenal success of its predecessors, the Harry Potter series, it still is a nice first edition with a wonderful associated story.  Make sure to catch the first edition though, ideally of the Sphere publication.  The Little, Brown firsts will probably still see some appreciation.

We will cover general publications by Little, Brown and Company in a later issue of our First Edition Identification series. For the US edition the complete print number line is indicated as in the picture below: 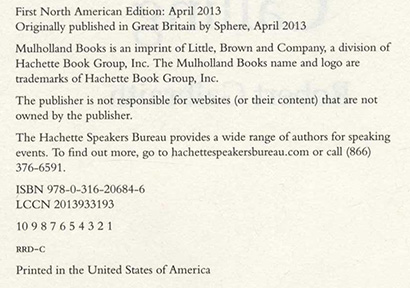 Happy hunting and good luck to Mr. (and Mrs.) Robert Galbraith with any future publications.