American novelist Gore Vidal is widely known for his witty, irreverent writing. His Narratives of Empire series contains seven historical fictions that explore the growth of America from her birth to taking her place as one of the great empires of history. 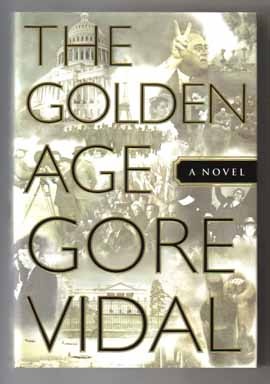 Spanning from 1939 to 1954, The Golden Age (2000), the seventh novel in Vidal’s Narratives of Empire series, ends the story of the Sanfords, Aaron Burr’s decedents. The final installment of the series follows America through World War II and the Cold War as she is transformed into an empire.

The plot follows Caroline Stanford, a former Hollywood actress now a newspaper publisher in Washington D.C., and her nephew Peter Sanford, publisher of an independent journal, as they live through Franklin Roosevelt’s manipulations to have America join World War II and Harry Truman’s fight against Communism and the results these experiences have on their personal and professional lives.

In his work, Vidal incorporates many well-known historical figures, including Eleanor Roosevelt, Tennessee Williams, and himself.

Heralded as Vidal’s best work, the novel is praised for its vivid depiction of American politics and culture during some of her most defining years. His use of wit and drama forge a work reminiscent of a soap opera that entertains readers and challenges their understanding of history and power. Vidal takes the experiences of Americans during this time and weaves them into the nation’s coming of age story.

While considered by some to be the best work of Vidal’s historical fiction, others find The Golden Age to be repetitive and confusing. Some critics claim the novel becomes more political philosophy and pseudo-memoir while others criticize his descent into conspiracy. From exploring a theory claiming the 1940 Republican convention was fixed to the claim that President Franklin D. Roosevelt had knowledge of the attack on Pearl Harbor and did not warn the Navy, Vidal oversimplifies history into conspiracy theory, which lends to seemingly sloppy writing.

“As for the human case, the generation of men come and go and are in eternity no more than bacteria upon a luminous slide, and the fall of a republic or the rise of an empire—so significant to those involved—are not detectable upon the slide even were there an interested eye to behold that steadily proliferating species which would either end in time or, with luck, become something else, since change is the nature of life, and its hope.”

“On March 21, nine days after Truman declared his "doctrine" to Congress, he created a Loyalty Review Board before which several million government workers would each be forced to swear that never, ever, deep in his heart of hearts, had he for an instant lusted after the evil, the godless, the monolithic, the world-conquering doctrine of communism, whose Vatican was the Kremlin and whose dues were everywhere in the government, in the classrooms, and even, it was whispered, in the churches of God's last best hope of earth.”

“A bright blue light from the doorway illuminated the dining room. Television light. Reflexively, senators checked their wigs; pushed at their hair; adjusted smiles. In his shadowy corner, Joe McCarthy seemed to expand like some huge bullfrog in the glow of the source of his power, television. Peter also noticed that his head was trembling.”

“Peter liked nothing better than to explore the miles of antiseptic Pentagon corridors where, it was said, if you walked far enough and long enough you were bound to meet yourself coming from the opposite direction, a nice metaphysical exercise in quantum physics, a subject that they had recently, mysteriously, been ordered to read up on.”

“...that brave pompous invention of the Enlightenment, the United States set in a wilderness, forever dreaming itself Athens reborn even as it crudely, doggedly, recreated Rome.”