Book Spotlight: Umberto Eco's The Name of the Rose

Throughout his life, Umberto Eco worked as novelist, literary critic, and academic. In much of his work, Eco makes literary and historical references, exemplifying a subtle intertextuality, the connection between different works of literature. The Name of the Rose, originally published in Italy in 1980, uses Eco’s previous study to make many such references to medieval sources that the reader must solve, adding a certain Sherlock Holmes feeling to the work. 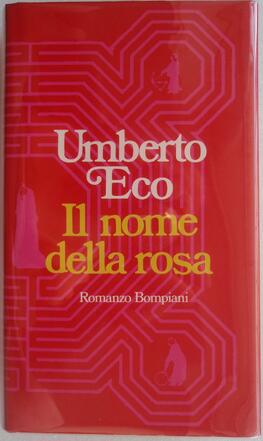 Set in 1327, the novel follows friar William of Baskerville and Adso of Melk as they travel to a Benedictine monastery in Northern Italy to attend a debate concerning accusations of heresy. When an illuminator, Adelmo of Otranto, dies, Abo of Fossanova, the monastery’s abbot, assigns William to investigate. As more men die, William only has his logic developed through studying Aristotle, his understanding of Aquinas’ theology, and his knowledge of Roger Bacon’s empirical science to aid in discovering the murderer. When a member of the Inquisition, Bernard Gui, arrives, the investigation is derailed by his use of Papal deduction, leading to forced false confessions. The abbot, upset that William has yet to find the true murderer, fires him. Not giving up, William and Adso continue their search for the criminal. Despite revealing the killer’s motive and the means through which he killed his victims, William believes he failed his task and leaves the abbey with Adso.

In 1986, a film adaptation staring Sean Connery and Christian Slater was released. Beginning production in 2018, set for release in early 2019, is an Italian eight-part miniseries. Grigore Gonta adapted the novel into a play in 1998. In 2006, BBC Radio aired a two-part drama by Chris Dolan based on the novel. Several video and board games have also been developed based on the novel. Bands like Ten and Iron Maiden have released songs referencing the novel.

Since this novel is still in print, the casual reader can find copies at retailers like Barnes & Noble and Amazon. First edition, first printing can be found ranging from $100 dollars to nearly $10,000 depending on the language, quality, and if the copy is signed.

One of the most striking elements of Eco’s work is his skill as a writer. Even if one does not enjoy the content of his work, his artistry must be appreciated. Here are five examples of this artistry from The Name of the Rose:

“Books are not made to be believed, but to be subjected to inquiry. When we consider a book, we mustn’t ask ourselves what it says but what it means…”

“What is love? There is nothing in the world, neither man nor Devil nor any thing, that I hold as suspect as love, for it penetrates the soul more than any other thing. Nothing exists that so fills and binds the heart as love does. Therefore, unless you have those weapons that subdue it, the soul plunges through love into an immense abyss”

“Until then, I had thought each book spoke of the things, human or divine, that lie outside books. Now I realized that not infrequently books speak of books: it is as if they spoke among themselves. In the light of this reflection, the library seemed all the the more disturbing to me. It was then the place of a long, centuries-old murmuring, an imperceptible dialogue between one parchment and another, a living thing, a receptacle of powers not to be ruled by a human mind, a treasure of secrets emanated by many minds, surviving the death of those who had produced them or had been their conveyors.”

“Thus I rediscovered what writers have always known (and have told us again and again): books always speak of other books, and every story tells a story that has already been told.”