If you find yourself in Oslo and are thinking about looking for antiquarian books, we can point you in the right directions. Norway isn’t home to the largest remaining selection of antiquarian bookstores in Scandinavia (shops in Denmark and Sweden seem to have fared better than others), but there are still quite a few in which visitors can spend many hours scanning shelves and boxes.

Norwegian Literature and Fiction in Translation

Before we begin tracking down the best walking routes to Oslo’s antiquarian bookstores, we want to make sure you have an idea of what kinds of books to look for. If you’re not seeking to spend an exorbitant amount of money but want to come away with a Norwegian first edition, you might turn to the works of Lars Saabye Christensen. Christensen has been writing novels and poetry since the 1970s. Some of his works have been translated into English, such as Beatles (1984) and The Half Brother [Halvbroren] (2001).

If you’ve read any of his works in English translation, it’s a good bet that you’re enamored with his writing style. And you might be able to snag a first edition of one of these texts, along with others in Norwegian that haven’t yet been translated into English. You might also seek out a copy of Signaler, a Norwegian literary and poetry journal, edited by the writer.

Years before Lars Saabye Christensen began writing, a Norwegian novelist came to prominence across the globe. With his sordid past as a Nazi sympathizer, the Nobel Prize-winning writer Knut Hamsun could be a good bet for seeking out an exciting first edition in Norwegian. Hamsun’s most famous work, Hunger [Sult] (1890), brought him onto the literary scene, and he continued writing for decades afterward. While he maintains a tenuous place in Norway’s literary history — a character in Lars Saabye Christensen’s novel The Half Brother selects Hamsun’s works to burn during World War II due to his fascist sympathies — he remains a significant figure worth scrutiny.

Norwegian antiquarian shops also stock, in addition to authors from within the country, many important and interesting works in translation. For example, we found some early Norwegian printings of Pablo Neruda translations, as well as a colorful Norwegian first edition of a Nancy Drew novel. In other words, look broadly, and you’re likely to find some interesting pieces to bring home.

Walking the Streets of Oslo 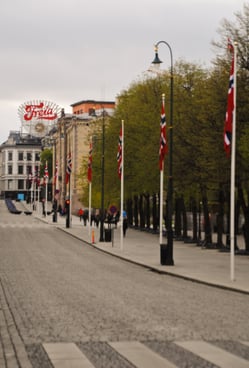 Now that you know what to seek, where should you go? Scandinavia has a website dedicated to online book buying, but we found that many of the shops on Oslo’s streets don’t sell online, and for those that do, you’re likely to find a number of books that aren’t included in the internet inventory. So, what we're trying to say is, get walking! We recommend starting at Norlis Antikvariat, a multi-level store very near to Norli Bookshop on Universitetsgata, the latter of which sells an extremely vast selection of new books. At Norlis Antikvariat, you’ll find a large selection of Norwegian poetry, Norwegian fiction, and fiction in translation.

If you then head west on Kristian IVs gate, just around the park that encircles the Royal Palace, you’ll encounter Gullsmed Antikvariat — one of our favorite shops in Oslo. The books are stacked from floor to ceiling, with more on shelves and in boxes. It’s a cramped space, but it’s worth making your way inside. And if you find yourself having trouble navigating the system in which the books are arranged — we did! — just ask the shopkeeper for some help. He has even more books in the back, and he’ll be happy to help you locate the editions you’re seeking.

A number of other shops exist further west in the city, such as Majorstuen Antikvariat, a small shop that’s a member of the International League of Antiquarian Booksellers (ILAB), as many of the bookstores in Oslo are. We recommend this space, in particular, because it’s located on a side street with a number of other antique and vintage shops, many of which also sell books. And if you’re really in the mood to hunt through bins for potentially priceless books, wait for the weekend antiques market in Grünerløkka. This neighborhood not only has a number of used bookstores waiting for you, but the weekly market offers stands selling books you’re unlikely to find anywhere else.

Regardless of where you choose to look for books in Norway — from specialized antiquarian shops to weekend markets — you’ll find that the Scandinavian capital has much to offer its visitors.