Edwin Eugene Aldrin, Jr. was born January 20, 1930 to a career military man and his wife Marion. Nicknamed “Buzz” when his sister called him “buzzer” instead of “brother,” he served in combat during the Korean War as an Air Force fighter pilot and went on to become the second human to walk on the surface of the moon.

Military Career and Introduction to NASA

Aldrin’s career began at West Point Military Academy with a degree in Mechanical Engineering, continued through flight school and service at war, and included a tour as an aerial gunnery instructor at Nevada’s Nellis Air Force Base. With his second acceptance to the Massachusetts Institute of Technology- he had turned down his first in favor of West Point- he earned his PhD in Astronautics with a 1963 thesis about Manned Space Rendezvous. The same year, his second application to the Astronaut program was

accepted when the requirement to have been a test pilot was waived, and Aldrin was assigned to Gemini mission 12. He completed some of the first movement in space outside a protective hull, called Extravehicular Activity (EVA), and set a record for the longest time outside a vehicle, spending over five hours in space protected by only his suit.

Aldrin trained as backup Command module pilot for Apollo 8, man’s first flight around the moon, and was the primary pilot for the famous manned lunar mission Apollo 11 in which he followed Neil Armstrong’s steps onto the moon’s surface. Following his time at NASA, Colonel Aldrin was appointed Commandant of the USAF Test Pilot School, eventually retiring from 21 years.

All told, Aldrin spent over 4,500 hours in flight and twelve full days in space, and is credited with the idea of training astronauts under water still in use today. On the 20th anniversary of his lunar landing, he wrote a detailed account of the American-Soviet race to the moon entitled Men From Earth (1989). He also penned two autobiographies, Return to Earth (1972) and Magnificent Desolation (2009), both of which document his missions in space as well as his personal struggles with depression, alcoholism, and two divorces. 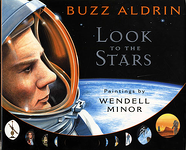 In the 40 years since his retirement, Aldrin has remained a vocal part of the space community, an active member of the Republican Party, and a participant with the Free Mason Lodge #144 in New Jersey. His non-profit organization, the ShareSpace Foundation, claims as its mission “sharing the wonders of space with children of all ages and fostering affordable space travel opportunities for all people.”

Aldrin resides in New Jersey, maintains his own website, and frequently offers talks and candid interviews. He holds three U.S. patents for space orbit and rocket design, and has co-authored a science fiction novel, Encounter With Tiber (1996), a geo-political thriller, The Return (2000), and two children’s books, Reaching for the Moon (2005) and Look to the Stars (2009).