Carl Friedrich Gauss and The Method of Least Squares

Dr. Norman Vincent Peale, author of The Power of Positive Thinking coined the phrase: “Shoot for the moon. Even if you miss, you’ll land among the stars.” While he probably didn't have 19th century German mathematician Carl Friedrich Gauss in mind when developing the sentiment, he may well have. Actually, in Gauss’ case, it would be more fitting to say “shoot for the comet,” the Ceres comet at that, and as it turns out, the math genius didn’t have to be too concerned with missing. 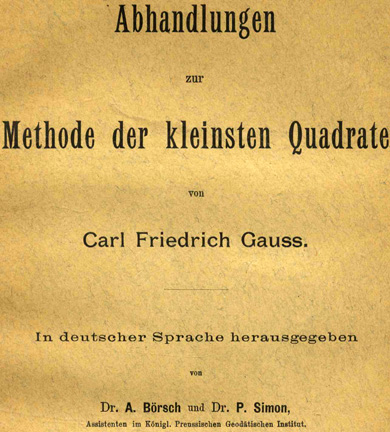 Carl Friedrich Gauss was born on April 30, 1777 in Brunswick. From a young age, his aptitude for mathematics was undeniable. He was an only child who didn’t come from a wealthy family. Instead, it was his calculating prowess that allowed him to stand out and earn the financial backing of those in power, including the duke of Brunswick as early as 1791. Gauss could do complicated mathematics calculations in his head beginning at a young age and carrying on throughout the course of his life. Thanks to the financial aid of the duke, Gauss was able to study mathematics at the University of Göttingen.

Early in his career, Gauss was already developing deeply sustainable research in the fields of mathematics and astronomy. At the green age of thirty two, he published his method of calculating orbits of celestial bodies. In doing so, he used the method of least squares, claiming to have knowledge of this fundamental mathematics approach as early as 1795, when he would have just been 18 years old.

That Gauss was the first to define the method of least squares was contested in his day. Adrien-Marie Legendre first published a version of the method in 1805. In short, Gauss pushed his definition to the extreme in a way that Legendre hadn’t. And, it was Gauss who won the great comet debate. (You knew I would get there eventually, right?) Let me explain. 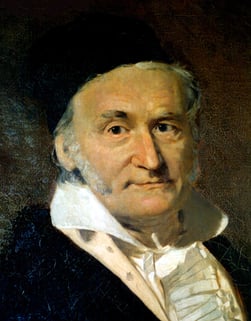 On January 1, 1801, an Italian astronomer named Giuseppe Piazzi discovered the comet Ceres and was able to maintain visual tracking of its position for forty days at which time it disappeared behind the sun. The problem of the day then became determining when the comet would reappear from behind the sun’s glare without having to go through the complicated renderings of planetary motion. Figuring out the comet’s position became an intense competition with many of the renowned minds of the time vying for best guess.
Carl Friedrich Gauss used his method of least squares analysis to correctly predict where Ceres would reappear, allowing Franz Xaver von Azch to locate it. Gauss was only 24 years old when he completed his analysis, and he was the only one to correctly predict Ceres position. He went on to do much research in the field of astronomy, notably publishing a work on the computation of orbits.

Gauss’s other contributions include demonstrating why a globe stretched out into a flat map can never be proportionate. It’s the same reason why one can never completely wrap a basketball in gift wrap—it all has to do with the curvature of a flat object versus that of a spherical object. Gauss called his discovery Theorema Egregium, latin for “remarkable theorem.” He was able to assign a numerical figure deemed the "Gaussian curvature” to objects. In doing so, he identified that objects with the same intrinsic curvature could be transferable. For example, you can fold a sheet of paper into tube because a tube and a flat sheet of paper have the same intrinsic curvature. This fact accounts for why printing cylinders work in identically transferring words to a page. But, the same cannot be said for spheres and flat objects because their Gaussian curvatures are different.

Gauss’s genius was uncanny. Unfortunately, he stopped publishing many of his findings, so his thoughts, experiments, and results weren’t made known until after his death when others sifted through his belongings. That, coupled with the fact that Gauss is one of the great mathematics and science minds of all time, make his works an exceptional addition to one’s collection.