American writer Joseph Heller is notably recognized for writing Catch-22. Published in 1961, the novel takes place during the latter half of the Second World War, telling the story of John Yossarian, an Air Force captain for the United States military. Although the novel did not instantly top the bestseller’s lists, it has since gained popularity, adding the phrase “Catch-22” into the English Language. 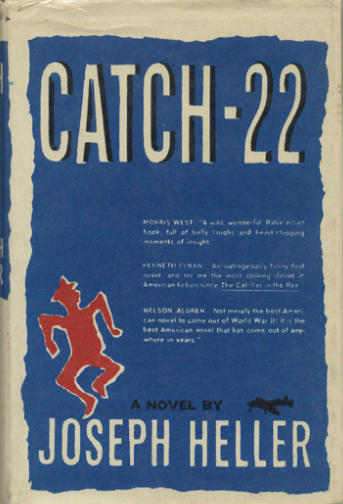 A "Catch-22" refers to a paradoxical situation where a solution contradicts the course of action, making a resolution impossible. For example, in Heller’s novel the ongoing predicament is to be honorably discharged by means of being declared mentally insane, without literally telling that you are losing your mind, because recognizing that your thoughts are not sane, indicates that you are mentally stable because someone truly insane cannot differentiate between right and wrong. Still following?

But is this term all that Joseph Heller can take credit for?

In the late 1990s,  Lewis Pollock wrote to the London Times, pointing out the uncanny similarities between Heller’s Catch-22 and Louis Falstein’s Face of a Hero (1950).

Falstein’s novel was published eleven years prior to Catch-22, and was based on Falstein's own experiences in the United States Air Force during World War II. Face of a Hero was immediately well-received and positively reviewed in The New York Times Book Review with claims that it was “the most mature novel about the Air Force that has yet appeared”, according to Review writer Herbert F West. Despite this acclaim, Hero was soon out of publication until this controversy arose.

The characters of Face of a Hero and Catch-22 have similar personalities, physical descriptions, and experiences; it's easy to see Pollock’s concern. However, there are just as many differences which make both novels unique in their own ways. For instance, Face of a Hero is narrated in first person, while Catch-22 is narrated in third-person omniscient, allowing the reader to know what is going inside the mind of every character. Falstein’s account retains a very factual and realistic tone, while Heller uses outlandish names—Major Major Major Major to name the most extreme—in addition to manifesting an imaginary aura in the minds of his readers.

Falstein died four years prior to this controversial stir, so reporters were unable to ask the author his thoughts on Heller’s book. Falstein’s son briefly stated that his father never discussed Heller or Catch-22. When Joseph Heller was asked to account for the coincidences, he replied “If I went through the Iliad I would probably find as many similarities to Catch-22 as other people seem to be finding between Falstein's book and mine.” Heller's editor at Simon & Schuster further commented that in all his years of working with Heller, he would never describe him as a dishonest man and the accusations that Heller would plagiarize is absurd.

While this may be a beautiful instance of coincidence, one cannot help but wonder.