Joseph Rudyard Kipling (30 Dec 1865 - 18 Jan 1936) died in England at the age of 70, the most famous and highly paid writer of his time. Born to Victorian parents who named him after Staffordshire's Rudyard Lake, Kipling split his boyhood between the markets of Bombay India and an abusive English foster home. His life of travel and tragedy led to two near nervous breakdowns, but made his creative work accessible to both the aristocracy and the everyman. 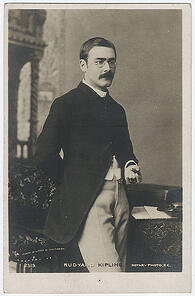 Entranced by the natural world and accustomed to solitude, Kipling was helplessly driven by his imagination and worked frenetically from the age of 16 as a journalist, travel writer, and author. He published his first collection of poems when he was 21 and within a few years became a celebrity whose influence spanned three continents. Kipling was already famous when he married Caroline Balestier, but he fell in love with their three children and wrote the tales he's best known for during early fatherhood on the Connecticut River. He wrote an inscription in the first edition of 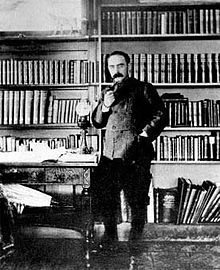 The Jungle Book: "This book belongs to Josephine Kipling for whom it was written by her father. May 1894." Josephine was his eldest child and first daughter; she died of pneumonia five years after the book was published. Kipling wrote many of his tales for her, and published a collection of her bedtime stories, Just So Stories (1902), which included some of his most original and enduring work.

Kipling also authored weightier things, including Britain's most popular poem, "If--." This stoic set of advice to his only son, John, was published five years before John went missing in France during World War I. John Kipling was 18 when he joined the Irish Guard, an accomplishment which required three enlistment attempts and a favor called in by his father. During several trips to France in search of his son and years of guilt and grieving that followed, Kipling wrote a two-volume history of the Irish Guard (1923) and his son's regiment.

Twenty years after publishing his first collection, Kipling was awarded the Nobel Prize for Literature in 1907 for his "originality of imagination, virility of ideas and remarkable talent for narration." He was the first English-language recipient and, at the age of 42, he remains the youngest ever. Kipling continued to write well into his sixties, but the death of his children ended light-hearted tales. He observed trains for hours, penned dozens of stories about science and marvels of innovation, and developed the graduate ceremony still undertaken by Canadian engineers.

Posthumously, many critics have called Kipling an imperialist, and some have even speculated he had a homosexual relationship with Wolcott Balestier. But he remains responsible for ingenius innovations of the short story and the advancement of the entire genre of children's tales.  As recently as 2010 and 2012, the scientific community honored Kipling by naming after him a crater on Mercury as well as a species of extinct crocodile. Perhaps Kipling's most impressive achievement was his ability to marry the myriad interests of his mind. He wrote of the changing fall leaves in Vermont as an army in battle:

"A little maple began it, flaming blood-red of a sudden where he stood against the dark green of a pine-belt. Next morning there was an answering signal from the swamp where the sumacs grow. Three days later, the hill-sides as fast as the eye could range were afire, and the roads paved, with crimson and gold. Then a wet wind blew, and ruined all the uniforms of that gorgeous army; and the oaks, who had held themselves in reserve, buckled on their dull and bronzed cuirasses and stood it out stiffly to the last blown leaf, till nothing remained but pencil-shadings of bare boughs, and one could see into the most private heart of the woods."

Faithful father, Poet of Empire, Nobel Laureate: Rudyard Kipling was named after an English lake but died a man of the modern world.