Charles Baudelaire and French Poetry: A Tradition of Transgression

In 1857, Charles Baudelaire was prosecuted by the French government. The proofs of his seminal poetry collection, The Flowers of Evil, were seized, and six poems too obscene for publication were removed. Judges argued the poems “necessarily [led] to the excitement of the senses by a crude realism offensive to public decency.” Baudelaire and his publisher were fined, and the poet’s dark and bold work alienated even his friends. All in all, this was a success for Baudelaire, an artist who set out to challenge the poetic preoccupations of artificial refinement and sentiment that came before him. 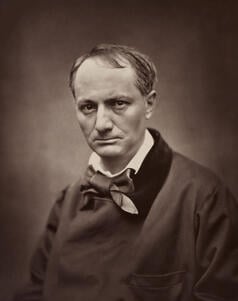 Baudelaire fits the mold well for the type of French artist that has now become a kind of stereotype. He was frequently poor and was always evading his creditors. He ascribed to dandyism, a kind of aristocracy of the individual, in which personal elegance and distinction were the primary ideals. He sought pleasure and sensation at every turn, frequenting brothels and indulging his affections for laudanum and absinthe. Considering his flagrant libertinism, it might be no surprise that Baudelaire had an inconsistent work ethic and only published two collections of poetry in his lifetime.

Once the six “indecent” poems were taken out of The Flowers of Evil, Baudelaire was able to publish his book to a public who was already intrigued by the controversy. Important critics and writers like Gustave Flaubert greatly admired his book. His principle influences were Victor Hugo and Edgar Allan Poe, whom he translated into French. But Baudelaire was thoroughly modern, so much so that in some ways, today’s poets are still catching up to him. He is credited with creating the word “modernity” (modernite, in French) and encompassing the deracination of life in the city and in society. He was interested in boredom, in ennui, in vice, and in challenging the clichés of beauty. For example, here is the first pair of verses from “A Carcass:”

My love, do you recall the object which we saw,
That fair, sweet, summer morn!
At a turn in the path a foul carcass
On a gravel strewn bed,

Its legs raised in the air, like a lustful woman,
Burning and dripping with poisons,
Displayed in a shameless, nonchalant way
Its belly, swollen with gases.

The poem continues with the narrator likening his beloved to the putrefaction of the dead animal, mingling sensuality with mortality in truly jarring ways. The first two sentences provide a familiar poetic introduction and suggest that a much different poem will follow. But Baudelaire abruptly turns his eyes toward the perverse and unsettling in a way that is almost humorous.

T.S. Eliot credited The Flowers of Evil with being the first work of modernism. The book is also credited with kicking off the Symbolism movement, which was prominent in France, Belgium, and Russia. But for all of Baudelaire’s insight and talent, his poetry is far from optimistic. He ardently believed in humankind’s propensity for vice, for sensual pleasure and indulgence. Like his Gallic predecessor the Marquis de Sade, Charles Baudelaire liked to think of himself as revealing to polite society the pleasures of evil that it truly desired. We would all be criminals, if only we had the courage. 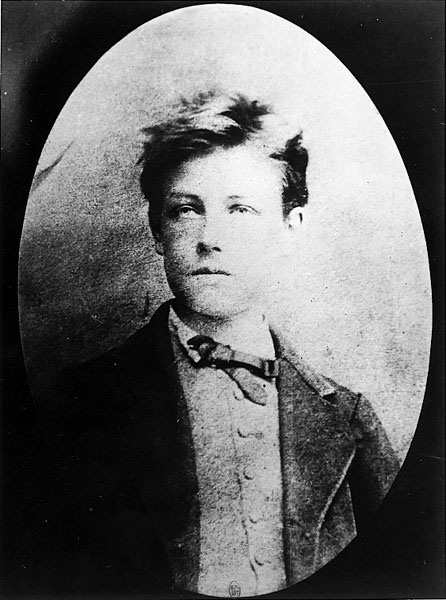 While Baudelaire’s fascination with evil is essential to his appeal, his conclusions sometimes detract from it. But if we are to believe eminent critic and Baudelaire-advocate Harold Bloom who argues that literary greatness comes from a writer’s strangeness, then Baudelaire is great indeed. Poets like Arthur Rimbaud and Stephen Mallarme readily admitted their debts to him. He was “genius, a visionary,” wrote Rimbaud.

For his part, Arthur Rimbaud was a youthful and ambitious libertine. He earned his place in the canon remarkably early in life and actually retired from writing at age 21. Rimbaud was likewise a wayward soul. He abandoned home, ran away with poet and romantic partner Paul Verlaine, who during a dispute, shot Rimbaud in the left wrist.

Rimbaud was a self-identified outsider, and thus a natural disciple of Baudelaire. He identified himself as born of inferior stock. He was drawn to vices—those of anger, sloth, and indulgence—and resisted the pragmatic truth that one must work to live. He was markedly anti-Christian, and perverted religious imagery in many of his poems. “Morality is the weakness of the brain,” Rimbaud wrote, as if there was any doubt he was borne from the iconoclastic spirit Baudelaire championed.

Charles Baudelaire was vindicated not only by poets who followed him, but by his government. His prosecution for the indecency of The Flowers of Evil was overturned in 1949, and the six excised poems were permitted to be printed. The brothel-loving, starving artist who led a tenuous, misunderstood life would eventually become an archetype of Parisian creativity. The peculiar pioneer of modernism and symbolism became a familiar figure on syllabi. In some respects, we have become used to the poetry of Charles Baudelaire, but it will be hard for any reader to forget for a moment his perennial audacity.