Charles Dickens and Christmas: The Haunted Man and the Ghost's Bargain

Charles Dickens published his final Christmas novella, The Haunted Man and the Ghost's Bargain, A Fancy for Christmas-Time, in 1848. While it has been upstaged by the most famous of his yuletide stories, A Christmas Carol, both share a distinct similarity: a ghostly plot. While Dickens is often credited with inventing the modern idea of Christmas, that of trees and garlands and presents, he also cast a spooky, haunting mood over the holiday. To Dickens, Christmas was not only a time for festive warmth, but one for dark examination, too. 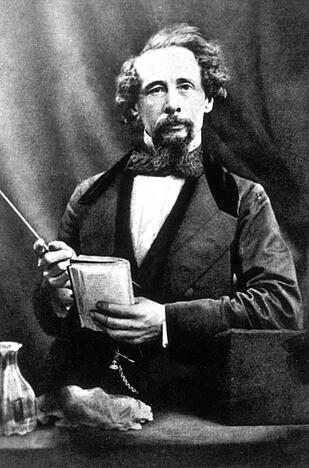 Christmas takes place right after the winter solstice, as the weather grows colder and the days are at their darkest. In the Victorian era, this seasonal transformation drew people to the warmth of the hearth during the longest nights of the year. It was in these dark nights that ghost stories and Christmastime first began to co-mingle.

Ghosts in Dickens' work are associated with the opportunity for redemption. In A Christmas Carol, the three Ghosts of Christmas confront Scrooge about the necessity of changing his cold and miserly ways. The protagonist of The Haunted Man, Redlaw, is a loner - a professor of chemistry who spends his days studying, cut off from the world around him.The ghost of the book presents his bargain: “Hear what I offer! Forget the sorrow, wrong, and trouble you have known!” Redlaw, wary of the phantom but desperate, accepts the offer, and agrees to have all of his unpleasant memories purged from his brain.

Dickens, himself, was all too familiar with the pain of a traumatic past. Before the feet of the ghost, Redlaw cites the death of his sister as a torturous memory. Dickens' own sister, Fanny, had died less than a month before he began his book. But Dickens' real trauma came from childhood, when he was abandoned by his family and forced to work in the unforgiving factories of London.

In his youth, Dickens' father was sent to debtor’s prison at the Marshalsea in London. The family was left penniless. Twelve year old Charles was forced to pawn his books, drop out of school, and work in the ignominious conditions of a shoe blacking factory. Eventually, the family home was given up and his mother and siblings lived in prison with his father. Dickens moved to a boarding house, and, like his own Oliver Twist, was forced to fend for himself as an forsaken child on the streets of London. 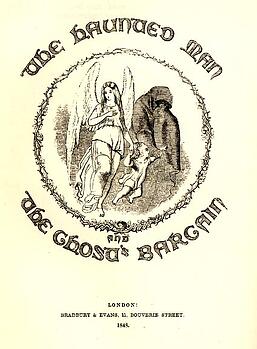 His burdensome childhood memories informed much of the author's politics and concerns. He was well-known for his sensitivity to the conditions of the poor, the imprisoned, and the disenfranchised. It has been said that Dickens, even as an adult, would weep when passing by the site of the shoe blacking factory from his childhood. He resented being left behind, having his education disrupted, and having been cruelly treated as a child laborer.

On the terrible feeling of childhood abandonment, Dickens has Redlaw deliver a confession that could have come from the writer just as well as his fictional creation: "I am he, neglected in my youth and miserably poor, who strove and suffered and still strove and suffered...No mother's self-dying love... No father's counsel aided me... My parents, at the best, were of that sort whose care soon ends, and whose duty is soon done; who cast their offspring loose, early, as birds to theirs; and, if they do well, claim the merit; and, if ill, the pity."

Dickens' childhood trauma didn't hamper his work ethic. He wrote The Haunted Man and the Ghost's Bargain in two months, from October 5th to its completion on November 30th at the Bedford Hotel in Brighton.

Although Dickens finished writing the book weeks ahead of its scheduled publication, the book wasn't 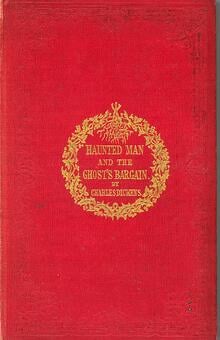 fully completed, thanks to Dickens' and the publisher's pictorial ambitions. His massively successful A Christmas Carol was published with eight illustrations. Compare that to The Haunted Man's beautiful inventory of seventeen plates, an effort that required the work of four artists. Dickens knew that the increased number of illustrations would cost money, and would thereby affect his own profits, but that didn't deter him from producing a truly striking volume.

Dickens and his artists achieved an admirable ratio of about 1:12 illustrations to pages. The first edition of The Haunted Man and the Ghost's Bargain reflects not only the literary prowess of Dickens, but his strong aesthetic care for the book as a physical object.

How then does Charles Dickens end his distinct Christmas novella? As the reader might imagine, the elimination of one's memories has disastrous spiritual effects. Redlaw, reaching rock bottom, describes himself as "a man without a soul, as incapable of compassion, artistic sensitivity or spiritual understanding, as the abandoned waif whose neglected short life is equally barren of memories." He soon regrets his decision, and realizes that personal harmony does not come from surrendering one's memory of suffering, but in reconciling it with one's joys. Redlaw learns it is best to forgive, not forget. Dickens echoed Redlaw's realization, when talking about his own harrowing past: "I do not write resentfully or angrily, for I know how all these things have worked together to make me what I am."