Collecting the Works of Arthur Miller

Arthur Miller was born on October 17, 1915 in Harlem. He would go on to be one of the most legendary playwrights of the twentieth century. Miller's most famous plays like Death of a Salesman (1949) and The Crucible (1953) remain widely studied and have continued to be performed and adapted today. Miller won the Pulitzer Prize for Drama in 1949. Perhaps making him just as much of a household name as his plays is Miller's personal life. 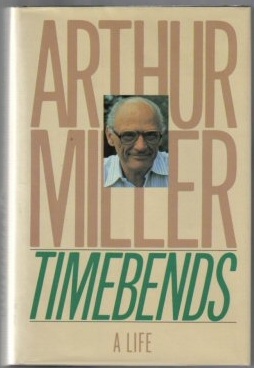 In the mid-1900s, he was married to Marilyn Monroe. In 1956, just before the wedding, he was subpoenaed to testify before the House Un-American Activities Committee, and the committee demanded he name those with whom he had political meetings. When he refused to comply, he was found in contempt of Congress, denied a passport, and blacklisted. Two years later, a judge overruled the conviction. Miller's lawyer called the HUAC hearing, especially the timing of it, a play for publicity and exposure.

The fascinating life of Arthur Miller, as well as his multitude of influential and important written and theatrical works, makes him a stellar subject for collectors. Here is a selection of fine Arthur Miller collectibles.

Timebends is Miller's autobiography. Hearing from the legendary playwright in his own words makes this a priceless book and a necessary addition to any Miller collection. As the dust jacket reads: "Beginning with his childhood and continuing through his life and career telling of both successes and failures, Miller gives colorful portraits of those people who touched his life".

The Creation of the World and Other Business

This comedic play takes as its subject Adam and Eve and, as the title suggests, the creation of the world. First performed in 1972, reviews of the show were mixed. The script was published in 1973 by The Viking Press in New York. The dust jacket declares: "In the world of literature there will never be an Adam and Eve and offspring that will not from now on need to match Miller's depiction of them in The Creation of the World and Other Business". High praise! First editions signed by Miller and in fine or near fine condition sell for between $250 and $300.

On Politics and the Art of Acting

In On Politics and the Art of Acting, Miller melds the real world with the theatrical world. He analyzes the candidates in the 2000 presidential election: George W. Bush and Al Gore. He compares their ability to put on a show to that of some of their predecessors, including Bill Clinton, Ronald Reagan, JFK, and FDR. The book is fascinating. It was published in 2001 by The Viking Press in New York. First edition copies in fine or like new condition and signed by Miller will sell for over $550.

The Theater Essays of Arthur Miller 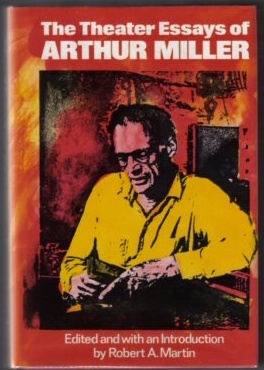 This title includes a collection of 23 essays and several interviews all on the subject of the theater. As the dust jacket notes, this collectible will be of interest to "the scholar, the critic, and the enlightened theatergoer". Published in 1978 by The Viking Press, first editions of The Theater Essays of Arthur Miller in fine condition and signed by the author will sell for around $700.

First published in 1945, Focus remains relevant today. The dust jacket details how the book is "A searing portrait of racism and redemption in the streets and alleys of Brooklyn during the final days of World War II...[I]t remains as chilling and incisive today as it was at the time of its controversial debut."

Penguin published a softcover edition of Focus in 2001. In like new condition, these books sell for between $150-$200.