When you think of Dan Brown, you may think of books filled with intrigue and cyphers, or you may think of movies starring Tom Hanks. However, what you aren’t likely to think of is a man whose original career aspiration was to be a songwriter and pianist.

Dan Brown is a brilliantly successful author who was born on June 22, 1964 in Exeter, New Hampshire. His father was a teacher of mathematics at Phillips Exeter Academy throughout his youth. His mother served as church choir master and organist at the Episcopalian Church in Exeter.  Throughout his life, Brown would find ways to honor teachings from both his father and mother.

Brown’s father inspired a love of cryptology in his young children by introducing it into their household at a very early age. To find Christmas presents, Brown would have to participate in elaborate treasure hunts, where codes and cyphers were the cornerstone of the puzzle. This relationship with cryptology would eventually play a large role in the types of books that Brown would write. 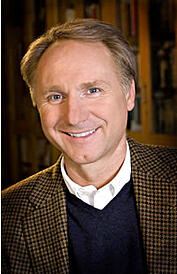 After graduating from Amherst College, Brown attempted to follow in his mother's musical footsteps, producing a children’s music album titled “SynthAnimals” and the adult album “Perspective.” Neither was a huge success, but they sold just enough that he was encouraged Brown moved to Hollywood to pursue his dream.

In Hollywood, Brown never reached what could be deemed as true success as a songwriter, but he did find success on a personal level. He met Blythe Newlon, the National Academy of Songwriter’s Director of Artist Development. She became a champion of his, and in 1993 championed Brown all the way back to New Hampshire where they would eventually wed, and he would begin work as an English teacher at his alma mater Phillips Exeter.

Following Brown’s reading of Sydney Sheldon’s novel, The Doomsday Conspiracy, in 1993, Brown considered becoming a writer of suspense novels himself. In 1998 the first of his six thrillers, Digital Fortress, was published. While Brown only has six books to his name, he has over 200 million books sold as of today. He is the one of the highest selling authors of all time, with the fewest number of total books.

Despite the number of books in print today, it is possible for true fans to find really rare, collectible versions.