Defining science fiction has always been a tricky proposition. It has been suggested that "you know it when you see it," but that hardly seems a sufficient rule. Still less helpful is the notion that the science fiction moniker applies to any fiction dealing imaginatively with concepts borrowed from science. The fact of the matter remains that select staples of the literary cannon have displayed an interest in science from Shakespeare’s work through the likes of Thomas Pynchon. This does little to change the fact that when we speak of science fiction we hardly ever mean The Tempest (1610), and we usually don’t mean Gravity’s Rainbow (1973) either.

Although it is likely that a precise definition will remain elusive, the science fiction boom of the mid-twentieth century brought a beacon of hope. Three beacons, actually: Arthur C. Clarke, Robert Heinlein, and Isaac Asimov. The so-called "big three" of science fiction, whose respective popularities swelled with the readership of Joseph W. Campbell’s Astounding Science Fiction magazine, were among the first to grapple not just with the ideas of the scientific community but also with its sense of rigor. In their works, scientific principles—even ones borne of fantastical imaginings—were subject not just to whimsical pairings with worlds and characters but to sustained inquiry more reminiscent of Carl Sagan than Alfred Lord Tennyson. That their works are often termed "hard" science fiction is no accident; two of the three (Asimov and Clarke) were scientists themselves, and each one sought plausibility and reasoning in his writing above all else. 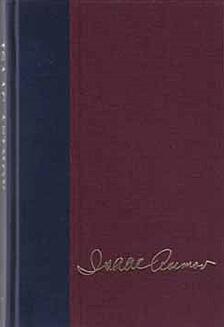 In painting these authors with broad strokes, it can become easy to overlook the differences of style and vision that separate the three. Their longevity and influence, however, comes more likely as a result of their three-pronged approach to science fiction (perhaps a manifestation of scientific rigor in its own right) than from any singularity of vision.

Asimov, for instance, who gained acclaim for his Foundation series (1951) and novels like Nemesis (1989), is best known for his three laws of robotics: a set of fictional laws designed to govern the behavior of robots in a near-future society. Asimov’s work carries these laws out to their logical end and conveys the awesome power, beauty, and destructive force of man’s technological innovations. A renaissance man in a very real sense, Asimov was not just a writer of science fiction, but of literary and biblical criticism (he wrote more than five hundred volumes on various topics in his lifetime), as well as a professor of biochemistry, and for a time the president of the American humanist society. It is this intellectual depth and curiosity that cemented his works in the science fiction cannon.

Robert Heinlein, on the other hand, was a writer through and through. While each of the "big three" enforced new standards for the "science" end of the sci-fi equation, Heinlein put just as much emphasis on the "fiction" half, evoking the genre’s literary forebears in his meticulous attention to craft. His most famous work, The Moon is a Harsh Mistress (1965), gained acclaim for its deeply imagined depiction of a moon colony and its political relations with the Earth, as well as its thorough examinations of libertarian politics, liberalism, and the frontier mindset. He is credited with bringing a modicum of literary seriousness to the genre without sacrificing hard science. Heinlein’s influence was so profound, in fact, that he is considered to have played a major part in convincing the American public that space travel was feasible. So much so, that he acted as guest commentator (alongside Walter Cronkite) for the Apollo 11 moon landing. Arthur C. Clarke, too, was a powerful proponent of space travel in his lifetime. Clarke, who was knighted by Queen Elizabeth in 1988 and awarded Sri Lanka’s highest civilian honor in 2005, was twice voted chairman of the British Interplanetary Society and published a host of noteworthy scientific writings on space travel throughout his life. In science fiction circles, however, Clarke is best known as the author of such novels as The Coming of the Space Age (1967), 2001: A Space Odyssey (1968), and subsequent sequels. By coupling his optimism for the potential for mankind’s technological advances with a cynical eye toward the decadence of his contemporaries, he produced a vision of the future like no other. His pen’s machinations gave birth to an aesthetic of equal parts majesty and terror. Like Asimov and Heinlein, Clarke has an asteroid named for him, but the trio’s names signal a much more powerful force here on earth: the definition of modern science fiction.