It’s a well-told story: a man is hitchhiking his way across Europe, has a few too many pints at the pub, lies down in a field, looks up at the stars, and thinks, “Hey, someone should write a guide to hitchhiking across space!” The British writer Douglas Adams (1952-2001) admitted that he’d told the story so many times, he wasn’t completely sure which parts were true and which were embellished.

Adams, who penned the wildly popular series, The Hitchhiker’s Guide to the Galaxy, had both an exceptionally creative mind and an obsessive need for approval. Creating his science fiction smash took a lot more than sudden inspiration on a summer’s evening. 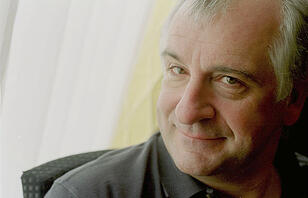 Adams began his professional writing career in college with the Cambridge Footlights Dramatic Club. Footlights was an incubator for comedic talent; it produced quite a few members of the Monty Python troupe. Adams wrote and co-wrote sketches and also performed, though he was ludicrously tall and prone to smile before a punch-line. After college, he moved to London to make his way in performance writing.

Grahame Chapman (of the aforementioned Pythons) saw Adams’ work in a Footlights Revue, and they formed a brief partnership. To Adams, this was a dream come true. He’d long idolized the six Python members for their comedic writing talent, and later in life, he could make the proud claim of being one of only two outside writers to get writing credit on Monty Python’s Flying Circus.

Things eventually fizzled with Chapman, and Adams was forced to take odd jobs to make ends meet. He’d sold a few sketches to the BBC, but his real break came when Simon Brett, an old connection who was also a producer, met Adams for lunch in 1977. The writer pitched three ideas to his friend, one of which was the seed of a comic science fiction story. The BBC approved a pilot for The Hitchhiker’s Guide to the Galaxy three weeks later. 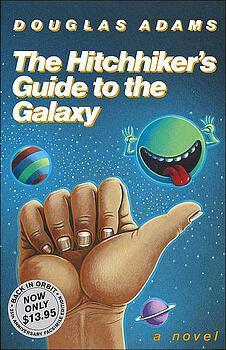 It’s surprising but true: H2G2 (as it was later dubbed by the fans) began first as a radio series. The BBC took its time in development, however, and in the meantime, Adams had a script accepted for the long-running TV show Doctor Who. He would end up writing three different episodes and got a job as a script editor. Then things with H2G2 really got going. Between finishing his scripts for Doctor Who, editing scripts, and writing for the radio, Adams was stretched fairly thin.

Producing the radio series was a circus in itself. Adams was known for getting things in under the wire, and there were times when he would be writing a character’s part as the actor was in the studio. The original performers of H2G2 were sometimes together for recording and sometimes recorded separately, depending on schedules. A great deal of tape cutting and editing had to be done before broadcast.

The first episode went out over British airwaves on March 8, 1978 at 10:30pm on a Wednesday. It had gotten almost no publicity (the concept is a bit hard to explain), but people listened; better yet, they told their friends. By the third week, H2G2 was the talk of the nation. Britain could not get enough of human Arthur Dent’s zany adventures in space. A second series was ordered, and publishers were lining up to secure rights to a novelized format.

One of the things that made H2G2 a success was Adams’ perfectionism as a wordsmith. He labored over every word, throwing out many drafts in the process. He didn’t just write; he crafted. Not every sketch writer can also write a brilliant novel, but Adams was a musician with words. Of course, it came at a price. Although he loved seeing his work succeed, the actual process of writing was torture. Adams’ first novel, The Hitchhiker’s Guide to the Galaxy, was published in October 1979. Readers may notice that it ends rather abruptly – Adams had far exceeded his deadline, and the publisher, Pan, sent someone to physically collect what he had finished up to that point, calling it the end. Of course, the book was a huge success, and Adams felt pressured to write a sequel. The Restaurant at the End of the Universe was followed by Life, the Universe and Everything and finished with So Long, and Thanks for All the Fish. In order to finish the last, Adams’ publisher put him in a hotel room and guarded him until the manuscript was complete. He was done with the H2G2 world after that.

Adams did continue to write, but he also spent a good deal of time enjoying his wealth and fame. In 2001, at the tragically young age of 49, he suffered a fatal heart attack. Fans and admirers across the globe mourned his passing.

Very few authors can be credited with influencing an entire genre, let alone all of popular culture, with their work. Practically anytime someone says “Don’t Panic” or uses the number 42 as a punch line, we hear the echoes of Douglas Adams. And I’m sure we’ll be hearing those echoes for many years to come. 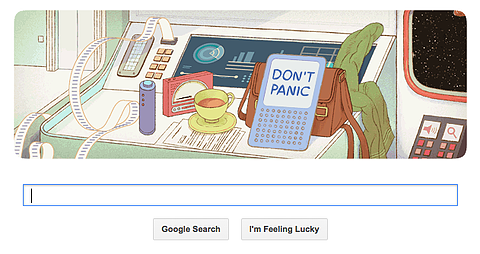