As a lover of literature, you may think you know everything there is to know about Shakespeare.  After all, no other author can really claim to have influenced language and storytelling the way he has. Even if Shakespeare’s works aren’t your favorite beach read, his writing and life demand respect from anyone who loves a good book. Since your high school English classes probably missed a few turn when reviewing his biography, here are eleven facts that may surprise you!

#1 –We don’t really know his birthday.

Although it’s common to hear that April 26, 1564 is Shakespeare’s birthday, this was actually the day of his baptism.  There is no written record of his birth. The time between birth and baptism varied, though the Anglican Church ordered parents to complete the ritual soon after birth. The Prayer Books of 1549 and 1552 both state, "The pastors and curates shall oft admonish the people that they defer not the Baptisme of Infants any longer than the Sunday, or other Holy day next after the child be borne, unless upon a great and reasonable cause declared to the Curate."

In Shakespeare’s time, standard spellings didn’t exist. His name was spelled a variety of ways, by both him and his contemporaries. Some spellings include Shappere, Shakspere, and Shaxberd. The name was 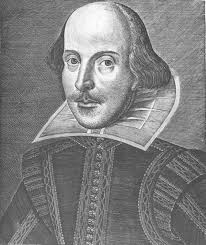 even hyphenated occasionally, as Shake-speare, which some scholare claim indicate that it was a pseudonym--again bringing the Bard's identity into question. However, "Shakespeare" was the most common variant in both Stratford and London, and there's no strong evidence that hyphenation definitively indicated a pseudonym.

Shakespeare never had a portrait painted of him during his lifetime. The picture we are accustomed to seeing was painted after his death by someone who could have only seen him as a child. That engraving appears on the cover of the First Folio (1623). Though Shakespeare may never have commissioned his own portrait, he was a public figure. It's likely that unauthorized portraits of him circulately. A reference to such an image is reference in a play published in 1601.

Although his plays are set in many different countries, Shakespeare probably never left England. Sometimes his ignorance of geography shows, such as in The Winter’s Tale, when he places a coast in a landlocked country.

#5 – His parents and children were probably illiterate.

Shakespeare came from humble beginnings.  Although he attended school where he learned to read and write, his parents never did, and neither did his wife or children. Shakespeare's literacy has been used to argue that Shakespeare the actor could not also have been the playwright, as actors were supposedly illiterate. But there's ample evidence to show that even lower class actors were expected to be literate, as they did, after all, have to read their lines! Furthermore, company owners were almost always literate, and Shakespeare was an owner of the acting company. 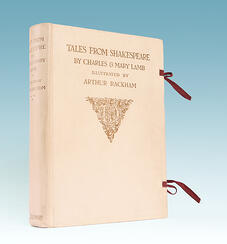 #6 – Shakespeare has no living descendants.

Many bookworms would love to find a link to Shakespeare in their genealogy, but  Shakespeare’s line ended after his grandchildren passed away. The only remaining (and now distant) relations are descendants of Shakespeare's sister Joan.

Shakespeare may have been born into a poor family, but the success of his work actually made him very wealthy in his adulthood. He lived comfortably in one of the largest houses in his community. Few are aware that Shakespeare was also a grain merchant. Scholars at Aberystwyth University argue that Shakepeare was a rather ruthless businessman. In 1598, Shakespeare was even prosecuted for hoarding grain during a shortage, and he was also pursued on suspicion of tax evasion!

Shakespeare played several minor roles, such as Adam in As You Like It, and the ghost in Hamlet. Prior to his career as a playwright, Shakespeare had been an actor--and was not always a favorite of the critics. In a 1592 pamphlet, Robert Green describes Shakespeare as an "upstart Crow." Shakespeare was also one of the owner-actors of Lord Chamberlain's Company (later the King's Company once James took the throne). There, he worked alongside famous actor Richard Burbage.

#9 – Some may argue that he isn’t really an Elizabethan writer.

Shakespeare is known as being active during of golden age of Queen Elizabeth’s reign, but the works that are most loved today were actually performed after the Queen had died. During Elizabeth's reign, playwrights were particularly susceptible to censorship. Sir Francis Walsingham carefully policed everything that appeared on the stage because it was the most popular form of public entertainment at the time. Jonson, Kyd, Marlowe, and Shakespeare all had run-ins with Walsingham's enforcers. (PBS offers an excellent overview of censorship in Elizabethan times.) It's likely that after the Queen's death, Shakespeare had more freedom of expression. Meanwhile, by this time he was also a much more accomplished writer, so it makes sense that his later plays would be among those considered his best.

When Shakespeare suspected that his death was near, he took the liberty of writing the words he wanted engraved on his tomb. They include a curse for any would-be grave robbers.

It may seem silly to us that Shakespeare was so concerned about grave robbery. However, at the time it was hardly uncommon for people to seek relics of prominent people--which included their body parts. And the medical community was always looking for fresh bodies to dissect. Shakespeare would have been a candidate because his cadaver might have offered clues about hypothesized differences between "normal people" and ingenious artists. 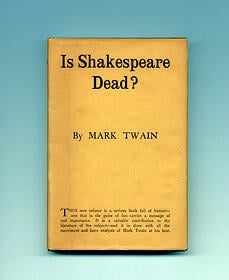 #11 – Conspiracy theories regarding who really authored Shakespeare’s work are unlikely.

Occasionally articles are written or movies are made that claim Shakespeare is a hoax. They attribute his works to another Englishman who was born into a family of high class. While these conspiracies may be interesting, there is little evidence supporting them, and these claims were only made in the last 250 years. Mark Twain took up the issue in Is Shakespeare Dead? He read Sir Granville George Greenwood's The Shakespeare Problem Restated and was fascinated with Greenwood's arguments regarding Shakespeare's legal knowledge (or lack thereof).