The Enduring Controversy of the Warren Commission

On September 24, 1964, the Warren Commission presented its long-awaited report. The exhaustive 888-page document outlined the Commission's investigation into the assassination of President John F Kennedy. Though the Commission's own members and even President Lyndon B Johnson professed their confidence in the Commission's findings, the report also fueled the fires of multiple conspiracy theories.

Lyndon B Johnson, who'd been riding in the motorcade just three cars behind President Kennedy, was sworn in as President aboard Air Force One on the runway of the Dallas airport. He didn't want to conduct a federal investigation of Kennedy's assassination, arguing that the Texas authorities should handle the "local killing." But when he learned that both the US Senate and the House of Representatives were leaning toward conducting their own investigations, President Johnson was forced to act; he feared that multiple reports of the assassination might conflict and create unnecessary doubt. He resolved to build a commission that included members from all branches of government. 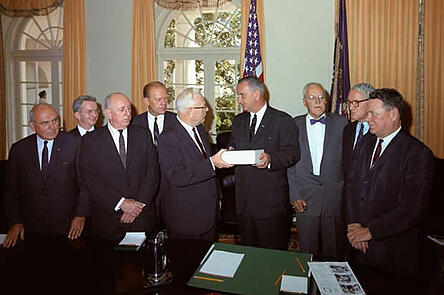 President Johnson's top candidates, however, were none too keen to serve on the commission. Chief Justice Earl Warren, whom Johnson called upon to lead the commission (and who lent the group its common title, the Warren Commission), foresaw all the possible legal entanglements that would result from his participation. He acquiesced to the appointment only after President Johnson argued that an inadequate report might lead to public panic--and possibly even nuclear war if it aggravated international relations.

Warren was not the only member of the Commission to participate under duress. Conservative senator Richard Russell outright refused to serve on the committee because he disagreed with Chief Justice Warren's liberal judicial record. But President Johnson simply ignored his reservations and publicly named Russell to the Commission anyway, privately telling Russell that his participation was imperative "for the good of America."

One member, on the other hand, may have been a little too eager to lend a helping hand. Gerald Ford, then a congressman, was named to the Warren Commission. Evidence now indicates that Ford approached FBI Assistant Director Cartha DeLoach and offered to confidentially keep the FBI apprised of the Commission's activities. DeLoach took him up on his offer, and after Ford's death in 2006, a cache of FBI records showed that Ford had shared much information with the FBI. One fascinating insight: at least two unnamed members of the Commission (probably Russell and Congressman Hale Boggs) were not convinced that all shots had been fired from the Texas School Book Depository.

Though it doesn't appear that Ford himself attempted to obscure the truth from the Commission or otherwise hinder its investigation, other members and government entities almost certainly acted uncooperatively--including Chief Justice Warren himself. A close friend of the Kennedy family, Chief Justice Warren refused to release Kennedy's autopsy photos to the Commission. He also tried to prevent interviews with Jacqueline Kennedy, saying that he didn't want to invade her privacy. 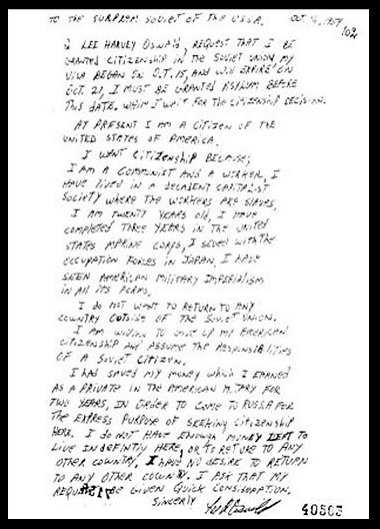 Finally, Warren refused to allow the Commission to interview witnesses who had known Oswald during his visit to Mexico, when he'd gone to both the Cuban and Soviet embassies.  One exhibit (pictured at left) is a letter from Oswald to the Soviet government, written about four years before the assassination. Oswald begs for Soviet citizenship, saying that he wanted to leave "a decadent capitalist society where the workers are slaves."

Despite their inside information from Ford, the FBI still failed to cooperate with the investigation. They hid the fact that they'd been watching Oswald, and that he'd left a threatening note (which they later destroyed) at the FBI's Dallas field office. The FBI also removed an agent's name from the typewritten transcript of Oswald's address book they provided to the Commission. Congressman Boggs would later note that FBI Director J Edgar Hoover had "lied his eyes out" during his testimony to the commission.

Like the FBI, the CIA had also monitored Oswald prior to the Kennedy assassination. But they denied any connection to Oswald and didn't inform the Commission of their covert operations in Cuba--including multiple schemes to assassinate Fidel Castro. That information may have influenced the Commission's proceedings, especially because Castro himself was suspected of having masterminded the assassination. Commission lawyer William Coleman actually met with Castro on a fishing boat off the Cuban coast to interview him. No notes were taken during the three-hour interview, but Castro repeatedly denied any involvement.

The Warren Commission ultimately determined that Lee Harvey Oswald had acted alone (the so called "lone gunman theory") and that a single bullet had struck both President Kennedy and Texas Governor John Connally (the "single bullet theory"). They also declared that there had been no conspiracy; Oswald had acted alone. However, since he was killed so soon after the assassination by Jack Ruby, his motives remained unclear, and the Warren Commission stated that it "does not believe it can ascribe him any one motive or group of motives." And finally, the Warren Commission determined that the Secret Service had been derelict in preparing to protect the president during his visit to Dallas.

President Johnson publicly agreed with the Warren Report, but he privately doubted their conclusions, as did members of the Kennedy family. Congressman Boggs  took issue with the single bullet theory, while Congressman Russell admitted a "lingering dissatisfaction" with the Report in general. When the Report was released to the public three days later, only 56% of Americans believed the lone gunman theory. Critics soon found flaws in the Commission's methodologies and conclusions. By 1966, only 36% of Americans had confidence in the Warren Report. 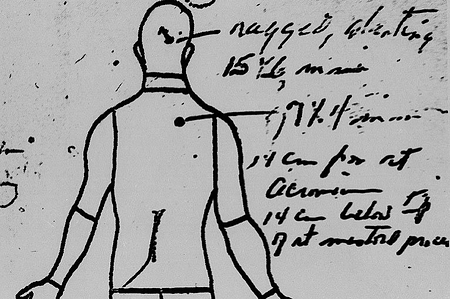 When the Zapruder film, an amateur video of the assassination, was released along with other evidence, public confidence plummeted. One particularly pernicious piece of evidence came from Exhibit 397: the autopsy sketch of President Kennedy (pictured above) that seemed to indicate the second bullet had hit Kennedy in the upper back. Former Navy doctor Commander J Thornton Boswell later admitted that the autopsy sketch had been hastily done and that the lower bullet actually struck the president at the base of the neck, as the Warren Report indicated. Nevertheless, critics said the autopsy sketch pointed to a second shooter.

In 1979, the US House of Representatives established the House Select Committee on Assassination (HSCA) and reopened the investigation into President Kennedy's death. One key piece of evidence: an audio recording from a Dallas police officer's radio that seemed to indicate there were "probably" two shooters. Though this evidence later came under scrutiny, it nevertheless undermined confidence in the Warren Report. Furthermore, the HSCA found that a conspiracy was likely. Today almost two-thirds of Americans believe that there was conspiracy involved in the JFK assassination. 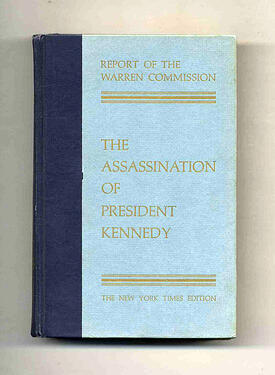 Today the Warren Report and most of the Commission's evidence reside at the National Archives, where they're available to the public for research. President Kennedy's autopsy photos, however, remain off limits; one must be a member of a relevant presidential or congressional committee or have permission from the Kennedy family.

The New York Times published an edition of the Warren Report in 1964. Considered the authoritative edition, it includes all the text and all of the Commission Exhibits necessary to understand the report. Mass market paperbacks often leave out not only parts of the text, but also significant portions of evidence. Thus the Times edition has become an important volume for historians and collectors alike.

In 1965, the Times also published The Witnesses, edited by Anthony Lewis and including an introduction by President Ford. This volume offers highlights of the hearings before the Warren Commission, making it a somewhat more approachable source.