Famous Figures in the History of Bookbinding, Part Two

The way we present and preserve the written word has changed considerably over the millennia. When Johann Gutenberg introduced movable type, our concept of the book changed forever. Since then, famous figures like William Caxton, Jean Grolier, and Samuel Mearne introduced the concept of the book as an object of art. In more recent centuries, Roger Payne and William Morris paved the way for the modern private press movement. 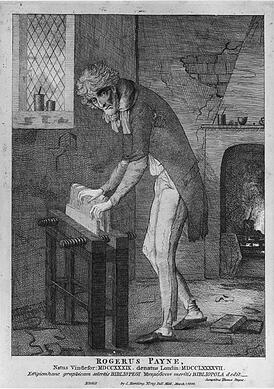 Born in Windsor in 1739, Roger Payne learned the basics of bookbinding as an apprentice for an Eton bookseller. In 1766, through the help of "honest Tom Payne "(no relation), Payne obtained employment with a bookseller at Mews Gate. He later set up his own bookbinding business near Leicester Square, rising to eminence as one of the most skilled book binders in British history.

Payne worked almost exclusively in morocco, usually choosing bright colors like crimson to showcase his gilt tooling. Payne's elaborate decorations were not, however, merely an outpouring of artistic expression. Rather, they were based on Payne's own interpretation of the book; Payne considered the binding a service and complement to the book itself. He usually richly gilt the book's spine, while the boards might be clean and simple, or covered with intricate embellishments. Payne quickly earned a reputation for exceptional work; not only were his books beautiful, but each leaf was also firmly and separately stitched to the back. He also sewed in silk headbands. Payne never signed his work--such was not the convention of the time. Instead, his works are generally identified by his bills, which often included a lengthy explanation of why he chose to decorate the volume as he did. Payne's work clearly shows the influence of Samuel Mearne.

Payne's primary patrons included the Earl of Spencer, the Duke of Devonshire, Colonel Stanley, and Reverend Clayton Mordant Crachrode. When Payne passed away in 1787, John Nichols, editor of Gentleman's Magazine, wrote of Payne, "He lived without rival, and died, it is feared, without a successor."

By the time William Morris died at age 62, he'd delved into countless occupations, from poet to Socialist reformer. But one of his most lasting contributions was his role in sparking the private press movement, alongside John Ruskin and Edward Burne-Jones. The men, disenchanted with the automation of the bookmaking process, saw the Industrial Revolution as the start of a decline in creativity and self-expression, a decline they hoped to stymie by reviving the craft of bookbinding.

Morris and his cohorts attended the Great Exhibition of 1851, which inspired them to form the Arts and Crafts Exhibition Society. The society held its own first exhibition in the winter of 1888 to 1889. The success of the venture encouraged Morris to found Kelmscott Press. Morris avidly studied the bookbinding methods of fifteenth-century printers and binders because he believed their techniques vastly superior to those of his contemporaries.

So taken with medieval practices was Morris, he even created a new typeface that embodied the spirit of the era yet was still easy to read. He also briefly undertook papermaking, with the aim of creating exactly the right paper. And he very nearly appealed to the Pope himself to acquire Roman vellum (of which the Vatican had a monopoly). Morris' extraordinary efforts to elevate the form of the book proved an inspiring and unifying force in the private press movement. 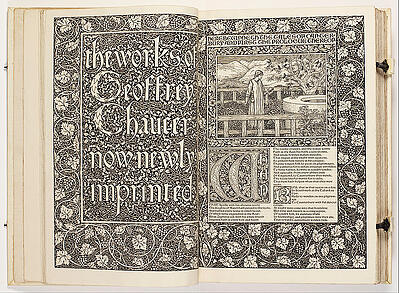 From the Kelmscott Press edition of Chaucer

Six months after Morris published the first Kelmscott Press book, the Roberts Brothers press in Boston published a photographic facsimile. Soon a few Kelmscott Press books found their way to the States, and then Morris himself commissioned American versions of some of his work. Private printing had truly come into vogue in America. The Auverge Press handprinted William C Gannett's The House Beautiful with the help of none other than Frank Lloyd Wright. And L Frank Baum, who had been interested in printing since he was a teenager, printed a book of his own poetry, By the Candelabra's Glare, in 1898. Morris' Arts and Crafts style would dominate the world of private press for decades.

Thanks to William Morris, private press thrived on both sides of the Atlantic until the Great Depression. The abrupt economic downturn diminished people's interest in books as objects, and in some cases it became difficult for book binders to acquire the materials of their craft. But in the 1950's, the movement reasserted itself. Book binders moved away from Morris' Arts and Crafts style. Today, collectors will find an incredible variety of private and fine press books.