One of the most prominent literary voices for political freedom and racial equality in South Africa, Nadine Gordimer wrote fifteen novels, more than two hundred short stories, and numerous other essays and works of criticism. Gordimer resided in Johannesburg, South Africa, a city that features prominently in her fiction. After her death in 2014, literary magazines across the world published tributes to the writer and her role in the anti-apartheid movement. Gordimer’s literature remains essential to any consideration of the relationship between fiction and politics. With so many works to choose from, where should a reader begin? Tracking a career that spans more than sixty years, here are five of the most influential books of Nadine Gordimer.

Gordimer’s first novel made known to the Western world the writer’s interest in South African politics. Although numerous critics have cited this early work as one in which Gordimer’s own experiences as a white, suburban South African woman make their way to the forefront, the novel introduces Gordimer as a voice of resistance under apartheid. Set in Johannesburg, the novel is a bildungsroman of sorts that traces the coming-of-age narrative of Helen Shaw, a middle-class white South African student. Like Gordimer’s readers beyond South Africa, Helen is awakened to the violence of racial injustice in the country. A New York Times review at the time of publication highlighted how Gordimer’s readers, through her language, “have been made to feel the sense of doom...been inoculated once again with the guilt of the white man, the fear and fury of the black, and we are left with no reason to wonder why the latter feel and behave as they do in this terrifying, terrified land.”

More than twenty years after Gordimer’s first book was published, the author’s sixth novel depicts the story of a wealthy Afrikaner businessman and antihero, Mehring, who, unsatisfied with his life in the city, buys a farm. The stark racial injustices that pervade Mehring’s country begin to make themselves salient on his property, and as if crying out for justice, the land itself, through opposing forces of drought and flood, destroy the farm. Why is this book on our list? Given that it won the Booker Prize, it truly put Gordimer on the global map.

For its anti-apartheid message, this book began Gordimer’s long struggle with censorship in South Africa. To be sure, the book was banned by the treacherous National Party government for its call to political action. The novel shifts between third-person narration and the first-person point of view of the protagonist, Rosa Burger. Ultimately, this book traces the effects of Rosa’s father's legacy as an activist in the South African Communist Party and the events surrounding the Soweto uprising in 1976. Since Gordimer couldn’t publish the book in her home country, it was first published by Jonathan Cape in London before being circulated across the world and distributed clandestinely in South Africa. The novel, according to Gordimer, was “a coded homage” to Bram Fischer. Fischer was one of the most notable lawyers and freedom fighters in South Africa who was sentenced to life in prison for his political actions. 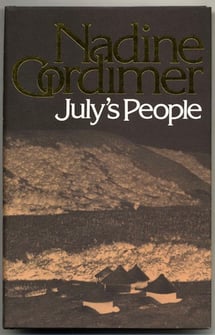 What would happen if a revolution had taken place during apartheid, requiring white South Africans to flee Johannesburg as black South Africans took over the country? Gordimer presents this question in July’s People, which tells the story of two fictional characters, Maureen and Bamford Smales. They flee the city with their children and go into hiding in July’s village. For years, July had been the Smales’s “boy,” a servant in their Johannesburg home. With the tables turned, the Smales must rely on July for their safety. Like Burger’s Daughter, the book was published by Jonathan Cape and banned in South Africa.

This novel—published after the construction of the new Constitution in the free South Africa and the start of the Truth and Reconciliation Commission (TRC)—deals with the post-apartheid violence that gripped Johannesburg. In many ways, The House Gun helped to redefine social and legal precedent in the free South Africa as it grappled with matters of death penalty jurisprudence and racial equality.

Gordimer won the Nobel Prize for Literature in 1991 and earned the glorious description, in the poet Seamus Heaney’s words, as “one of the guerrillas of the imagination.” Her novels depict the historical struggles in South Africa, but they’re much larger than brief moments in South Africa’s past. Indeed, Gordimer’s fiction remains an essential tool in navigating the complicated yet significant relationship among literature, politics, and freedom.