On June 6, 1944, the Allied forces began their invasion of German occupied France through Normandy. Through this operation, the foundation for victory on the Western Front was laid, leading to the eventual Allied victory over Germany. To commemorate the 75th anniversary, here are five interesting facts about D-Day.

1. It was the largest naval, air, and land military operation in history 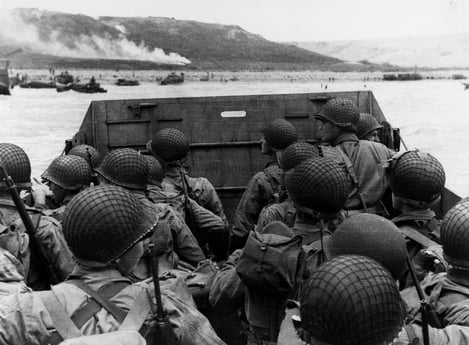 When the Allied forces launched their attack, it consisted of more than 150,000 troops. Over 5,000 ships and 13,000 aircraft helped transport and support the personnel. Since so many troops were involved in the fighting, many troops were injured or killed. The first 36 hours at Omaha Beach saw thousands of American troops killed. In response, the United States Army founded the American St. Laurent Cemetery at Omaha Beach where 9,387 of the American soldiers who fought on D-Day are buried.

2. Many forms of transport were used

Both air and naval transport were used to transport troops into position for the invasion. The naval component of the attack was called Operation “Neptune.” The nearly 7,000 battleships, destroyers, minesweepers, escorts, and assault craft helped transport more than 132,000 ground troops and continued bombardments on the coastal defenses and artillery support. The air forces helped drop 18,000 paratroopers the night before the invasion started to provide support for the troops on the beaches. They also flew over 14,000 sorties, single plane attacks, after securing air supremacy over the Germans.

3. There was more than one D-Day

Rather than being the name of the operation, “D-Day” is a general term used to denote the beginning date of a military operation. The “D” stands for “day” when the actual date is unknown or classified. The most well-known D-Day is the Allied invasion of German occupied France, but there were also D-Days in Sicily, Salerno, and Anzio that were just as dangerous as their French counterparts.

During the planning stages, the D-Day operation was called Operation Overlord. It spanned past the initial landings and included plans to liberate north-western Europe from Nazi control. Overlord opened a second front with the German forces, giving relief to the Soviet Union on the eastern front. In order to pull the operation off, previously unprecedented international cooperation was needed. By the time the invasion started, over two million troops from 12 countries were involved.

5. Behind the scenes work had to be completed before the invasion could begin

Tasks spanning from practical preparations to deception campaigns had to be completed to ensure an Allied victory. During the lead-up to the invasion, campaigns were run to draw German attention and forces away from Normandy. By the time of the landings, the German defenses were largely incomplete and undermanned. The French Resistance and the British Special Operations Executive worked together to provide intelligence and sabotage the defenses. Even into July, the Germans believed a larger force was set to invade elsewhere, keeping needed reinforcements from joining the troops at Normandy, allowing for the Allied troops to keep pushing forward.

Overlord: D-Day and the Battle for Normandy by Max Hastings takes readers past the initial landings on the Normandy beaches and includes further information on the difficult push inland.

Juno Beach: Canada’s D-Day Victory, June 6, 1944 by Mark Zuehlke focuses on the Canadian contribution to the invasion through firsthand accounts and military records.

The Americans on D-Day: A photographic History of the Normandy Invasion by Martin Morgan provides readers with compelling pictures of the invasion and the liberation of France and in-depth caption, bringing the invasion to life.