Prolific British-American playwright and children's author Frances Eliza Hodgson was born on November 24, 1849. A writer from a young age to lift her once-wealthy family from poverty, she went on the publish twenty novels, many of which became plays, and numerous short stories. 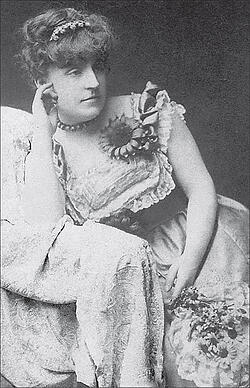 Burnett was the middle of five children, born to an ironmonger and his wealthy wife in Manchester, England. After Burnett's fifth sibling was born, her father unexpectedly died. Her mother ran her late husband's iron business for a time, and Frances was cared for by her grandmother, who gave her books and instilled in her a love of reading. One of her favorites was Harriet Beecher Stowe's Uncle Tom's Cabin.

The Hodgsons had to rely on their relatives for support and moved several times, from houses with lovely gardens to the impoverished borough of Salford. Frances excelled in school and was known as a storyteller among her friends. But she dropped out at 15 when the American Civil War halted Manchester's cotton trade. Her mother decided to emigrate to Knoxville, Tennessee, where one of her eldest sons was running a dry goods store. However the war caused his business to decline, and he could not provide for his mother and siblings.

They moved to a log cabin, and Frances befriended Swan Burnett, a neighbor who reintroduced her to the writings of Charles Dickens and William Makepeace Thackeray, whom she had read in England. Burnett was soon away to college, and Frances was determined to use her writing to lift the family out of poverty. She was published before she was 18, and then regularly featured in Godey's Lady's Book, Scribner's Monthly, Peterson's Magazine, and Harper's Bazaar.

With her earnings, Burnett moved her family to a better home, and the following year her mother died. Her siblings were all taken care of in marriage by then, and Frances could afford to travel back to England. Upon her return, she married Burnett, who was training to be a doctor. Frances had her first child, Lionel, and also began her first novel That Lass o' Lowries in 1874.

Burnett's income allowed them to live abroad until she had her second son, Vivian. Frances took to sewing and designing velvet suits with lace collars for her sons, and taking the time to curl their long locks. Her husband relocated to Washington, DC to start his medical practice, their debt forcing Frances to live with her in-laws until he was established. Shortly after, That Lass o' Lowries was published to good reviews, and she was able to set up her household in Washington.

Burnett worked on Haworth's, published in 1879, and made That Lass o' Lowrie into a stageplay. Though she continued writing novels, she also delved into children's literature. Her workload and keeping up the household quickly wore her out, and she suffered from exhaustion and depression. Yet she continued to be an active member of Washington society while writing. She wrote A Fair Barbarian (1881), a play co-authored with William Gillette Esmeralda (1881), and Through One Administration (1883), but it was not until Little Lord Fauntleroy was published in 1886 that she was finally established.

The work sparked criticism of Burnett as a mother because the title character was based on her son Vivian. Little Lord Fauntleroy also started a fashion trend, with Fauntleroy's velvet suits and lace collars in vogue. Her work had been pirated since the publishing of That Lass o' Lowries, and by the time of Little Lord Fauntleroy, she had won a copyright suit in England that established an important precedent for writers.

The dramatic version of Fauntleroy went on to Broadway and garnered her as much success as the book. The following year she regularly traveled to England and Europe, and that winter wrote The Fortunes of Philippa Fairfax in Florence while ill. She returned to England to turn it into a play, and when it flopped she turned to her friend Stephen Townsend.

In 1890, Burnett's eldest son died of tuberculosis, and this caused her depression to worsen. She threw herself into volunteering and playwriting in London before she returned to Washington to her husband and younger son two years later. Then she published her autobiography, The One I Knew Best of All, in 1893.

Burnett's husband had moved out of the house, and she continued to write to pay for her home in London and Vivian's education at Harvard. When Vivian graduated, she divorced Swan and moved to England. She married Stephen Townsend in 1900, but she quickly knew it was wrong. Townsend was ten years her junior and needed her financial support for his fledgling acting career.

She wrote two books in two years, The Shuttle and The Making of a Marchioness, and both were well received. The following year she suffered again from exhaustion and returned to the US, to a sanitarium, and told Townsend the marriage was over. 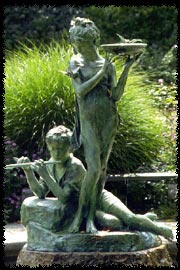 Burnett returned two years later and wrote The Secret Garden, followed A Little Princess, arguably her best known works. Then finally she moved back to the US, to Long Island, where Vivian lived and worked in publishing. She became editor of Children's Magazine at his request, and in it published her own short stories.

Burnett lived on Long Island for almost two decades before she died in 1924. She was memorialized in Central Park's Conservatory Garden with a fountain depicting Mary and Dickon from The Secret Garden.